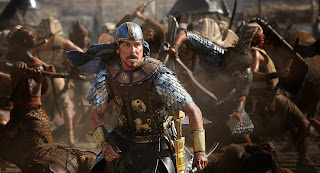 The 2014 offering Exodus: Gods and Kings is definitely not your mama's Ten Commandments and Christian Bale pales, next to the heroic, manly portrayal by
Charlton Heston, as this decade's Moses. In RIdley Scott's capable directorial hands, this rendition aspires to be epic in scope and is quite visually stunning in what
feels to be a fairly well done 3-D (enjoyed the effects of the many fires and sunlight), yet we are forced to listen to a rather empty script that is pretty
devoid of emotion, soul, passion for much of anything. Most spoken words are straight on a to the point. The cast should have shone much more for it features Bale,
Joel Edgerton as Egyptian brother, Ramesses, John Turturro as an oddly interesting Seti the First (Ramesses' father), Aaron Paul (Breaking Bad) as slave Joshua,
Maria Valverde, an enchanting Zepporah (Moses's wife) and Sigourney Weaver as Queen Tuya. Ben Kinsley portrays Hebrew elder, Nun, with his usual seriousness,
(he has to tell Moses what his real job and heritage is) but he is also the only one who's religious depth of belief was even remotely believable.

Bale, while portrayed as brother, beloved son, husband, father and liberator really lacked depth of character and a real spirited passion. He spent a fair amount
of time listening to a young boy advise him (Issac Andrews as Malak- God in child form) and appeared often to be talking to himself. All in all he just seemed a little
lost most of the time but we are sure it is tough being born to be an instrument of God that 400,000 people are depending on after 400 years.

Remesses, of course, suffers through all those plagues with his wife, even some I don't think a couple were mentioned in The Bible. Still they
the plagues were fairly interesting to watch play out. Most know the story or know where to read it at so no real spoilers here. The most heartless plague is also the most
breathtaking to watch unfold without the creeping fog effects this time. The scope is wide and the scale is large. Filmed in Spain, there are landscapes we haven't really
explored before. Exodus is definitely worth a ticket to see the special effects Scott has put on screen and to take a listen to the appropriately sweeping score.
But be prepared for a bit of a lag in the middle and for most of the awesome visuals to come in the second half.

Christians, Jews and those diversity sensitive may take issue in some areas with representation, and the critics will have issue with the script, length, lack of character
development and some of the acting (and accents), I thought it was a pretty good time taking a peek at the story in just a little but different light. The ending is pretty darn
unfulfilling and leaves those who are not Bible scholars scratching their heads a little. Were is not being marketed to the masses at PG-13, perhaps a few more liberties
might have been taken with the story line. It will surely be a topic of conversation for at least a couple of weeks. Go see it. Have some fun and just don't try to take it too seriously.
(Review by Cheryl Wurtz)

Posted by Dallas Movie Screenings at 4:14 AM