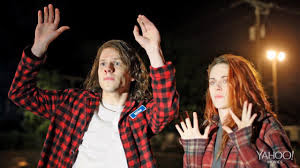 Director Nima Nourizadeh known for Project X and writer Max Landis known for Chronicle, both surprisingly entertaining and smart youth orientated adventures collaborated on American Ultra, a super spy story with a stoner slant. It's sort of Jason Bourne meets Chuck the TV series meets the Matrix, mixed up with smoking pot, romance and kick @ss action. It's a nice end of summer kind of break for those heading off to school.

Jesse Eisenberg really has that low keyed self effacing character down to a science. He plays Mike Howell who works at a Cash and Carry convenience store while drawing his cartoon character Apollo Ape. He's crazy in love with his girl friend Phoebe (Kristen Stewart) who works for a bail bondsman. Which is a good thing because the local sheriff is constantly busting him for pot smoking. Mike plans to take Phoebe on a trip to Hawaii but he gets a panic attack every time he tries to leave town. One day a woman comes into the store and relays a phrase to him. She tries to say it several times, but Mike looks at her blankly. The woman Victoria (Connie Britton) was head of a CIA experiment that Mike was a subject. He was the only one that survived and now the new boss Yates (Topher Grace) wants to eliminate him in favor of his own experimental program. Victoria was hoping that activating Mike, he would give him a better chance to survive once Yate's goons show up. And this is when the action goes full throttle when Mike is able to take two guys out with a spoon and a cup of hot ramen noodles.

Mike is the perfect everyman. He's innocent, neurotic, and becomes totally overwhelmed by the secret deadly skills that take over when fighting for survival. Yates is the perfect tool who is working without approval to take Mike out. A former desk jockey, a little bit of power makes him full of himself and annoying. Walton Goggins plays one of Yate's experimental operatives that loses his front teeth thanks to Mike's martial arts moves. John Leguizamo, Mike's dealer plays Rosie who hides the couple at his house. Both Stewart and Eisenberg have an awkward chemistry but they are the sweet to each other amidst the chaos around them. Britton gives a nice motherly kind of lethal protection to her only successful student. And Tony Hale as Petey, Victoria's former assistant comes through by standing up to Yate's insane orders. The film is rated “R” for the strong language, uber bloody violence, drug use, and mild sexual content.
(Review by reesa)