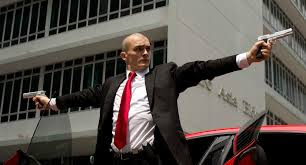 HITMAN: AGENT 47 is an action filled romp that makes you feel as if you are trapped as a voyeur inside the gun driven video game. But who wants to be trapped with no powers in a video game? FOX and first time Director, Aleksander Bach, had the opportunity to bring the mega Hitman video game franchise to the big screen. But HITMAN:AGENT 47 has fallen victim to the dreaded video-game-to-big-screen-movie curse. Such a shame with a built in audience that has purchased over 8 million copies of the six game series!

The movie was cast well with Rupert Friend playing the robotic, genetically engineered, elite assassin "Agent 47" with precision. Hannah Ware (Betrayal, Oldboy) is the believable girl on the run "Katia" searching for an unknown man from her past while being pursued by several ruthless killers.

HITMAN: AGENT 47 should have been a very interesting science fiction movie, but regretfully to its detriment, it is sci-fi light. We never learn about those barcodes tattooed on the Agent's heads. We never learn how these assassins have been genetically altered. The film has great fire powered chase sequences that are shot creatively. Unfortunately, there is not much of a story to go along with all the high powered video game like action. The film and its investors would have benefited greatly if someone had just given it more time. Sadly, we see this with many Hollywood films that are all big action and no story. If HITMAN: AGENT 47 had been given proper script development , it could have been the beginning of a wildly successful film franchise instead of just another forgettable Summer flick. Maybe FOX will take more time developing the sequel it has already ordered.

Honestly, I recommend saving your money to buy the next Hitman game installment due out in December. It will be a lot more enjoyable use of your cash.
(Review by Erin Nicole Parisi)