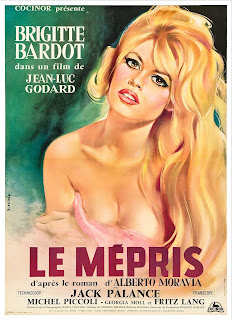 
French New Wave, or in French “Nouvelle Vague,” is the style of highly individualistic French film directors of the late 1950s—early ‘60s. Films by New Wave directors were often characterized by fresh techniques using the city streets as character in the films.

The New Wave films stimulate discussion about their place in the history of cinema and film. So whether a cinephile or a casual filmgoer, learn more about this distinctly French film movement. French New Wave Showcase, http://videofest.org/french-new-wave-showcase/, presented by the Video Association of Dallas and the Alamo Drafthouse Cinema - DFW, screens every Saturday at 4 pm at Alamo, 100 S Central Expressway, Richardson http://drafthouse.com/calendar/dfw.

“The French New Wave was a reaction to the bigness of Hollywood. Serious film scholars, writers and lovers started the movement to counteract the regimented Studio System. Their poetic way of taking filmmaking to the streets was immediately inspiring to a new generation of American filmmakers, showing them that creating original meaningful cinema was in reach. Their movement inspired many other cinematic moments that continue to propel cinema today,” said Bart Weiss, founder of Video Association of Dallas and founder of Dallas VideoFest, which starts its 28th year Oct. 13.

Frank Dufour, a sound and audio-visual artist, is also an Associate Professor and Director of the Graduate Studies Program for Arts & Technology at the University of Texas at Dallas. Dufour holds a Ph.D. in Hypermedia from the University of Paris VIII and is a member of the Laboratory, “Musique Informatique de Marseille,” as well as of the “Center for the Translation Studies” at UT Dallas. Dr. Dufour will lead discussions associated with each film every week.


“The French New Wave at the Alamo is a great occasion to re-visit its themes that find today a renewed accuracy and pertinence: Cinema is looking at cinema, the future is looking at the past from the ever paradoxical present of films. Cinema critically engages artistic expression and technology,” said Dr. Dufour.

"We are—how do the French say?—excité to partner with our friends at Video Association of Dallas for this French New Wave series in September! The French New Wave movement is one of cinema's most revolutionary periods, so we're proud to be able to feature these cinematic treasures on the big screen for cinephiles and classic film lovers alike," said James Wallace, creative director and programmer, Alamo Drafthouse – DFW.

Screenwriter Paul Javal's marriage to his wife, Camille, disintegrates during movie production as she spends time with the producer. Layered conflicts between art and business ensue.

Hailed as one of the finest films ever made, Jules et Jim charts the 25-year relationship between two friends and the object of their mutual obsession.

The legendary Francois Truffaut directs, and Jeanne Moreau stars as the alluring and willful Catherine, whose enigmatic smile and passionate nature lure Jules (Oskar Werner) and Jim (Henri Serre) into one of cinema’s most captivating romantic triangles. An exuberant and poignant meditation on freedom, loyalty, and the fortitude of love, Jules et Jim was a worldwide smash in 1962 and remains every bit as audacious and entrancing today.

Not just a defining work of the French New Wave but one of the great, lasting mysteries of modern art, Alain Resnais’ epochal L’Année Derniere à Marienbad (Last Year at Marienbad) has been puzzling appreciative viewers for decades.

Written by radical master of the New Novel Alain Robbe-Grillet, this surreal fever dream, or nightmare, gorgeously fuses the past with the present in telling its ambiguous tale of a man and a woman (Giorgio Albertazzi and Delphine Seyrig) who may or may not have met a year ago, perhaps at the very same cathedral-like, mirror-filled château they now find themselves wandering.

Unforgettable in both its confounding details (gilded ceilings, diabolical parlor games, a loaded gun) and haunting scope, Resnais’ investigation into the nature of memory is disturbing, romantic, and maybe even a ghost story.

Cléo de 5 à 7 (Cleo from 5 to 7)
Selfish pop singer Cléo (Corinne Marchand) has two hours to wait until the results of her biopsy come back. After an ominous tarot card reading, she visits her friends, all of whom fail to give her the emotional support she needs. Wandering around Paris, she finally finds comfort talking with a soldier in a park. On leave from the Algerian War, his troubles put hers in perspective. As they talk and walk, Cléo comes to terms with her selfishness, finding peace before the results come.
back.https://youtu.be/VYeZsW267P8

La Jetée
Chris Marker, filmmaker, poet, novelist, photographer, editor, and now videographer and digital multimedia artist, has been challenging moviegoers, philosophers, and himself for years with his complex queries about time, memory, and the rapid advancement of life on this planet. Marker’s La Jetée is one of the most influential, radical science-fiction films ever made, a tale of time travel told in still images.


About Dr. Frank Dufour
Dr. Frank Dufour teaches sound design in the school of Arts, Technology, and Emerging Communications at the University of Texas at Dallas. An active conceptual artist Frank co­founded Agence 5970, an independent laboratory dedicated to conceptual art, using predominately sound to explore concepts emerging at the conjunction of perception and representation and of Time as a structural support of expression.
THE FRENCH NEW WAVE SHOWCASE is made possible in part by The City of Richardson through the Richardson Arts Commission.


CHILDREN OF GIANT is a documentary that unearths deeply wrought emotions in the small west Texas town of Marfa, before, during and after the month-long production of George Stevens’ 1956 feature film, GIANT. Based on the controversial Edna Ferber novel of the same name, the film, GIANT did not shy from strong social-issue themes experienced throughout post-WWII America. Award-winning documentary filmmaker, Hector Galan (in attendance at screening) weaves clips from the feature film with the voices of the Mexican American and Anglo townspeople, cast and crew who experienced this unique conjunction of art and life in the summer of 1955.
https://www.facebook.com/events/385351318326905/
This program was made possible in part with a grant from Humanities Texas, the state affiliate of the National Endowment for the Humanities.
###

ABOUT VIDEO ASSOCIATION OF DALLAS
The mission of the Video Association is to promote an understanding of video as a creative medium and cultural force in our society, and to support and advance the work of Texas artists working in video and the electronic arts. The Video Association of Dallas (VAD) is a 501(c)(3) organization incorporated on April 25, 1989. It began in 1986 as a weekend event, “Video As A Creative Medium”, presented at the Dallas Museum of Art by independent curators Barton Weiss and John Held. That first event, which included two nights of video by selected local and national video artists, was a great popular success, which led to the founding of the Dallas VideoFest (DVF) in 1987. Video Association of Dallas also presents the 24-Hour Video Race, the Texas Show Tour, North Texas College Film Festival, Texas Fllmmakers Production Fund workshops, Three Star Cinema, and other programs throughout the year.

Posted by Dallas Movie Screenings at 6:26 AM