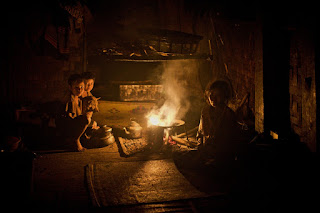 Plot: Libby Day was only seven years old when her family was brutally murdered in their rural Kansas farmhouse. Twenty-five years later, she agrees to revisit the crime and uncovers the wrenching truths that led up to that tragic night.


How many times will I reference Gone Girl? Guess the amount and you get a gold medal. Scratch that, I can’t afford a gold medal; I will get you a cookie. Never mind, I can’t afford a cookie; I will give you a handshake. Gone Girlis an adaptation that came out last year and the author, Gillian Flynn, of said book, also wrote the screenplay for the movie. Dark Places is also based on a book of the same author. I loved Gone Girl, so is this one the same level or a Lifetime movie at 2 p.m. on a Tuesday?

Pros:
Director Gilles Paquet-Brenner brings us a very basic, kind of bland Lifetime movie. Let me set this straight, I think Gone Girl is a Lifetime story and movie all on its own, but the difference between that and this is that Gone Girl was heightened by its directing, acting, writing, cinematography and music. It was turned into something different, but Paquet-Brenner doesn’t heighten the material, making it at the television movie level. It’s well-made Lifetime movie that you don’t really need to see in theaters.

Cons:
The story isn’t really memorable and the “killers” felt like they were thrown into the overall story and not really fitting in. The dialogue is cheesy in some scenes and I didn’t particularly think the narration by Charlize Theron fit and felt a bit jarring. Most of the characters were unlikable, so it was hard to get invested in the story. Another point was that there were a few things that were a bit unanswered and I kind of wanted closure.

Pros:
This is one of my favorite aspects. I thought everyone was on their A-game, even though the story was basic and the script was kind of weak, they all made it their own. Charlize Theron was great, it’s nice to see Corey Stoll, Tye Sheridan is always great, and Christina Hendricks delivers, maybe, my favorite film role from her from what I have seen.

Cons:
I thought a few actors were stale, such as Nicholas Hoult, but the biggest one was Chloe Grace Moretz. I thought her character didn’t really fit well with the story. The other supporting characters were forgettable.

Pros:
I do like the dark, harsh shadows in the shots dealing with this very, very dark story. It sets a mood that’s appropriate for the subject matter, but…

Cons:
…this irritates the heck out of me. I hate it when directors choose to do the quick, or sometimes slow then quick, zooms while characters are talking to add “intensity” to the scene. Directors like Paul Greengrass, who use this method for the Bourne Franchise or Captain Phillips, make it work because the cinematography is in the documentary style throughout the movie. This movie has no consistency with its cinematography and randomly does the quick zooms. Stop it. It doesn’t add anything.

Pros:
The story is ok to keep your interest at best.

Cons:
Since the characters are pretty unlikable, I couldn’t invest myself in the story, thus slowing it down. If you are into murder mysteries, then this will probably fly by.

Overall: This is an average, run-of-the-mill murder mystery with little substance among an extremely dark story. The acting is there and it works, even though I don’t particularly like the characters. It’s not good, but it’s also not bad. This is no Gone Girl and I will probably forget about it. This was a one and done for me.