Digging for Fire with Jake Johnson and Steve Berg Interview 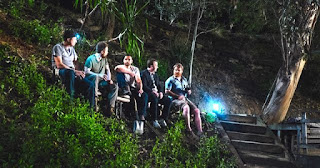 Plot: The discovery of a bone and a gun send a husband and wife on separate adventures over the course of a weekend.


What if someone found a bone and a handgun in your backyard and told you about it? Would you panic and call the cops? Would you try and solve a mystery with them? Or would you laugh at them because it sounds like they experienced a robbery at a KFC? That is the premise of Digging For Fire and it leads off into an adventure of a married couple split for the weekend and having to discover within them what it means to be married and love with somebody. That’s what I got from it, but I am always wrong so take it for what it is.

Pros:
Director Joe Swanberg, director of Drinking Buddies, brings another genuine story of relationships and focuses on a marriage versus a group of friends who may or may not have the hot’s for each other like in Drinking Buddies. The one thing I have appreciated from both of these films is that Swanberg casts the right people who act like they have been having a friendship for many years and it shows on screen. The writing feels authentic and filled with improv to really make this story as realistic to life as possible.

Cons:
As much as I liked the improv setting, I also felt like the story was a tad to thin and repetitive for my taste. It seemed like they had a great idea at the start and didn’t know what to fill the movie with for the bulk of it. However, I like the beginning and the ending. My favorite shot is when Jake Johnson’s character is digging further into the ground and comes across something. I won’t spoil it, but it was touching and I felt the emotion from his face (which the camera lingers on for awhile).

Pros:
The whole cast was really great and I felt the friendship between these guys and gals. Jake Johnson stands out as being his normal comedic self, but really turning on this humble performance when needed for the scene. The supporting cast is really great to surround the married couple in really figuring out what their marriage is all about. Also a plus is Brie Larson and there is never anything wrong with great talent…it doesn’t hurt the fact that she is gorgeous and she is starting to become one of my favorite actresses.

Cons:
Despite the great cast, I felt like there some characters underused. Maybe that is a selfish thing because I wanted to see more from certain characters because I thought they were interesting. Sam Rockwell comes to mind, but then again, is there such a thing as too much Rockwall?

Pros:
The other thing Swanberg really nails is his cinematography. Both this and Drinking Buddies, have a good, indie look to them; but I have also noticed his great usage of shots in the dark. He really takes advantage of people around a fire or under moonlight.

Pros:
With its 85-minute runtime, this will go one or two ways. Either you are engaged and it will run by fast for you or you are bored and it will seem longer than it actually is. For me, the beginning and the ending made the film go by faster, but…

Cons:
…the middle of the film is what dragged for me. There are characters popping in and out without any connection with them, so it felt more jumbled than anything causing me to be in confusion rather than enjoyment. But, I also understood what they were going and maybe it would have been ok to make this a tad longer so we could get to know some of the characters.

Overall: It’s a nice little indie about marriage and what it’s like to be separated from the one person you love and figure if that is what you wanted all along. Jake Johnson is great, and serves well as co-writer, with the rest of the cast giving great, real performances. I felt like the film dragged a bit with a stretched out plot and story but that still didn’t hinder the majority of my experience. Sadly, with all the films I see this year, this probably won’t make it on my list. If you like independent films, I would still recommend for you to check it out, and especially if saw Drinking Buddies and liked it.