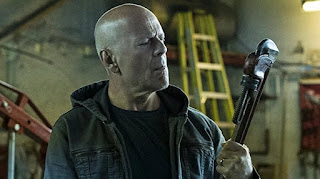 “Death Wish” -- This new updated and refashioned “Death Wish” takes some liberties and updates it quite a bit to modern times.

The original “Death Wish” (1974) was a Michael Winner-directed version with Charles Bronson headlining as Paul Kersey, a Big Apple architect who encounters some nayer-do wells that bring harm to his family in various ways. With the newer Bruce Willis-led incarnation, he is doctor at a hospital in Chicago. His Kersey comes and rinds out that his wife (Elisabeth Shue) and college bound daughter, Jordana (Camilla Morrone) were brutally attacked one night while he was on a call at the local hospital he was working at.

This action-drama comes courtesy of Eli Roth, who previously directed the hardcore and twisted "Cabin Fever,” “Hostel” and “Hostel 2” entries as well as the little-seen horror-drama 2013’s “Green Infeno.”

Roth finds a nice balance between the gritty revenge melodrama as well as the distinction of finding much needed justice to our ever growing cynical world.

Besides Willis and Shue, some great support also comes courtesy of Vincent D’Onofrio as his brother Frank.

Also decent in their small but memorable parts are Dean Norris and Kimberly Elise. The pair play Chicago detectives investigating Paul’s case.
Willis is an odd cat when it comes to his leading man roles in the Hollywood industry. For every big budget “Die Hard” entry he segues to direct-to-video melodramas like 2012’s “The Cold Light of Day,” “First Kill”” and “Once Upon a Time in Venice.” The latter 2 were released in 2017.
"
He is also odd in that directors like Wes Anderson and Quentin Tarantino who like working with him. One person that does not is Kevin Smith. He helmed in 2010’s “Cop Out,” which arrived in American cinemas with a D.O.A. tag on it. To be fair, however, it was one pf Smith’s biggest hits.
Honesly, I have no idea how this thing will play to a middle America audience. The trouble is rests in the fact audiences are still going to see other titles, Marvel’s “Black Panther” included.

We also have the fact that everyone will probably be going to see the recent Oscar winners as a way of catching up and becoming in the know.
Willis has done just mediocre stuff as of late. With “Death Wish” he has regained his movie star status for the moment.
Don’t forget, he has already signed on to be a part of M. Night Shyamalan’s “Glass,” which is kind of a long awaited sequel and follow up to both “Split” as well as 2000’s four-star masterpiece “Unbreakable.”