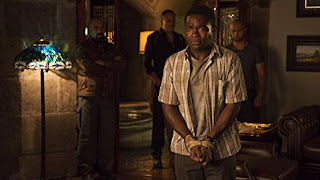 Director Nash Edgerton's Gringo is a wild and surprising crime caper written by Anthony Tambakis and Matthew Stone. There is so much going on with twists and turns it certainly holds your attention. But there is almost too much happenstance and excess characters that muddle the story. Fortunately there are some class actors who carry the proceedings effectively.

David Oyelowo gets to show off some comedy licks as Harold Soyinka, a mild mannered operations manager for a pharmaceutical company run by his friend Richard Rusk (Joel Edgerton - brother of Nash Edgerton). Rusk and Elaine Markinson (Charlize Theron) are the bosses of questionable moral and ethical character. The company makes a marijuana pill that they manufacture in Mexico. Harold notices some shortfalls in their Mexican inventory so Rusk and Elaine decide to go to Mexico to talk with the plant manager. Actually they want to tell the plant manager to stop selling their product to the cartel since they are trying to clean up their books so they can sell the company. But as everyone else in the world knows, you don't say "no" to the cartel. Harold who found out earlier that he will lose his job soon, despite Rusk's insistence that everything is alright, also finds out his wife (Thandie Newton) is having an affair and leaving him. Despondent over his life, he decides to stay in Mexico and tell his bosses he's been kidnapped for the insurance money. Except his company let the kidnapping policy lapse, so there is no ransom to be paid.

Rusk is truly a selfish, mean and despicable character. He may have sounded like he wanted to help Harold, but then maybe its good to get him out of the way because he's having an affair with Harold's wife. This doesn't sit well with Elaine, who is also having a fling with Rusk. Elaine is the typical hardcore bitch on wheels, who uses her sexuality to get what she wants. She's rude and crass and will sell anyone down the river, even Rusk, if it means she lands on top. There is also the Black Panther who runs the cartel, who wants to get a hold of Harold who can open the safe that has the formula. Plus there are the brothers who own the hotel where Harold is hiding who think they can use him for ransom. Across the hall from Harold is Miles (Harry Treadaway) and Sunny (Amanda Seyfried) who work in a California music store. Miles was asked to smuggle out some of the pot pills by another nefarious operator. If this wasn't enough, Rusk asks his ex-mercenary brother Mitch (Sharlto Copley) who is now reformed and helping with humanitarian relief in Haiti, to find Harold to take him out for the life insurance.

Everyone is way over the top and the action is often bloody slapstick. Harold maybe a bit naive and often clueless, but he has a strong survival instinct that get him through the insanity around him. The film seems bloated and flimsy in the middle, but the last section is action packed and satisfying.
(Review by reesa)