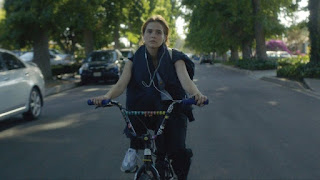 An Unnecessary Dark Turn and a Forced and Unbelievable Romance has this One Scratching our Heads.

*½ (out of ****)
The inciting incident of the plot of Flower is when the young woman propositions her soon-to-be-stepbrother for oral sex. She does it because he, having just been released from rehab for prescription drug abuse, looks “tense,” and when he understandably rejects this proposal because of their imminent sibling status, she laughs it off and emasculates him in the same breath. When, later, the two team up with her friends to exact a twisted form of justice upon his sexual predator, it comes across as peculiar, to say the least.

This is an odd movie with a strange sense of moral equivalence. It has no problem viewing its protagonist as a carefree agent of her own sexual politics, even as her proclivities have a certain pathology that suggests predation, and then thrusting her into a plot that has taken on an unintentional relevance due to recent cultural events. It isn’t the movie’s fault that it has opened in the fervor of that moment, but it proceeds to contradict itself at every turn. Indeed, it would be a crime to reveal a relationship that blossoms as a result of the events of its climax, but let us say that the nature of that relationship will not come as a surprise to anyone closely following the events detailed in the next paragraph.

The film opens with Erica (Zoey Deutch), the young woman in question, performing the same orally sexual act of gratification on a police officer, just before blindsiding him with threats of extortion alongside her best friends Kala (Dylan Gelula) and Claudine (Maya Eshet). It is a way of making quick cash for these reckless teens, and it apparently pays well. Erica’s home life is a source of constant grief: Her father was incarcerated for an attempted robbery, her mother Laurie (Kathryn Hahn) is about to be remarried to Bob (Tim Heidecker), as blandly pleasant as his name, and she is about to gain Luke (Joey Morgan), Bob’s son from a previous marriage, as a stepbrother.

Luke has, indeed, just exited rehab after spending some time there for stockpiling pain pills and inheriting a dependence on them in the process. His post-rehab diet is so restrictive he usually just turns down food, shivering from the symptoms of withdrawal and the smell of food he cannot eat. Erica is understandably, at first, annoyed by his intrusion into her cosseted existence, but the two form a reluctant bond when she discovers another secret in his past: Will Jordan (Adam Scott), the “hot, old guy” whom the three girls have been ogling for weeks at the local bowling alley, is actually a sexual predator lurking in the shadows of a supposedly tranquil town.

These details do not hint at what occurs in the entire final act of the screenplay, written by Alex McAulay, Matt Spicer, and director Max Winkler, and out of respect, neither will this review. Let us only say that, following a first act lacking much conviction and a slightly sturdier middle that hints at compelling character growth, the climax of this movie takes one wrong turn after another. The performances from Deutch and Morgan easily elevate the material given to them, which is comprised almost entirely of cheap manipulation and a whole lot of ickiness. Flower reveals itself to be nothing more than a melodrama, offering what we expect and, mostly for the worse, what we do not.
(Review by Joel Copling)