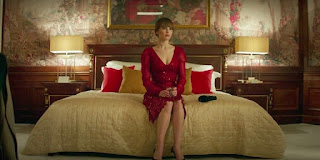 Why do all spy movies seem to be made during the winter, when it's cold and dark? This new spy thriller directed by Francis Lawrence and written by Justin Haythe, is based on the 2013 novel of the same name by Jason Matthews. The novel won two literary awards and was praised for it's insight into the way that espionage is conducted. The movie will doubt bring up comparison's to The Atomic Blonde which was more action packed with a strong female empowerment stance. This film has already drawn criticism for it's sexually demeaning exploitation. However Jennifer Lawrence who plays the tough and resilient Dominika Egorova really sells her survival skills that she has honed in The Hunger Games also directed by Francis Lawrence.

Dominika is a prima ballerina with the Bolshoi Ballet which provides her with an apartment and the medical care her mother (Joely Richardson) desperately needs. So when an unfortunate accident causes her to lose her lively hood, her Uncle Vanya (Matthias Schoenaerts), who happens to work for the Russian Intelligence Agency offers her a proposal that she cannot turn down. He sends her out on a mission that gets her raped and almost killed just to see if she could handle herself. Then sends her to a state school run by The Matron (Charlotte Rampling) who trains attractive young men and women to become "sparrows". They are stripped of all pride, to use their bodies to manipulate information out of their targets. Dominkia rightfully calls it "whore school".

She is soon sent to Bulgaria on an assignment to cozy up to CIA operative Nate Nash (Joel Edgerton) whose cover was blown at the beginning of the movie while trying to protect his Russian asset who was passing on intelligence information. The Russians also wants to find the mole, who will only communicate with Nash. Dominika's newbie skills gets her made right away by Nash, who tells his bosses that he wants to try and turn her into a double spy. Dominika's handler meanwhile is pressuring her with making progress and have sex with him. Her sparrow roommate is also working on an asset (Mary-Louise Parker) who is an alcoholic chief of staff to a U.S. Senator who wants to sell some documents for big money. This little subplot is a bit of a diversion so you don't think about who is using who.

Jennifer Lawrence always sells what every role she is doing. Despite the fluctuating accent, you feel for the young ex-dancer trying to find a way to keep herself and her mother alive in her repressed homeland. Ciaran Hinds and Jeremy Irons play Russian military leaders who are pulling the strings on her operation, demanding Uncle Vanya to get his niece to get the name of the mole or else. if you haven't figured out who the mole is, then you were not paying attention. The lack of chemistry between Dominika and Nash is no big thing. Because that is not what her end game is all about. Dominika wants to be the last one standing.
(Review by reesa)

Email ThisBlogThis!Share to TwitterShare to FacebookShare to Pinterest
Labels: The Red Sparrow review