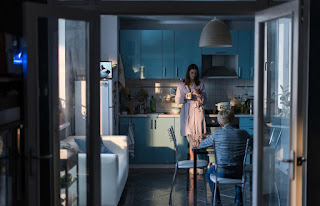 Loveless is a contemporary tragedy filmed in Moscow with international support after director Andrey Zvyagintsev lost support of the Russian government due to his critically acclaimed 2014 film Leviathan. Loveless won the Jury Prize at the 2017 Cannes Film Festival and it is nominated for the Academy Award for Best Foreign Language Film at the 90th Academy Awards. It is a dark and seriously uncomfortable film of divorcing parents of a lost child who must unite to find him.

Twelve year old Alexey (Matvey Novikov) is a quiet solitary child who comes home from school through the forested area in front of his apartment complex. His mother Zhenya (Maryana Spivak) tells him to clean his room as people are coming over to check out the space. She is met with a sullen attitude. Zhenya and his father Boris (Aleksey Rozin) are getting divorced and their relationship is contentious as they discuss who will take Alexey when they go their separate ways. The mom doesn't want him, she can't ask her mother, and the dad's girlfriend is having a baby. Alexey overhears their loud discussion and if obviously freaked out. Zhenya last see's Alexey at breakfast before he goes to school. That day, she spends it at the spa getting ready to see her older boyfriend Anton (Andris Keiss), a successful business man. Dad is spending the night with his girlfriend Masha (Marina Vasilyeva). Mom who returns in the early morning hours doesn't even notice her son is not home until the school calls reporting he hasn't been there in two days.

Zhenya calls to the police, and what seems like typical Russian bureaucracy, the police can't really do anything about it and chalks it up to another runaway situation. They suggest contacting the search and rescue volunteer organization who do a thorough search of the woods, print out flyers, question the neighbors and the hospitals. While trying to gather information from the parents they are dismayed when the mom has no real insight of her son. At least the father paid attention and knows Alexey's computer passwords and the name of his only friend. They are sent to check out the grandmother (Natalya Potapova) in case he went to hide out with her. And we see the reason why Zhenya is the way she is with such a combative and unhappy woman. Zhenya got pregnant when she was 18, didn't want to marry Boris, but did it anyways because he really wanted a child. Zhenya's frustrations and discontent is apparent in her relationship with her son. She spends all her time checking her phone than engaging his life or that of her husband. Meanwhile Boris is involved with a needy young woman who wants him to spend time with her even though she knows he is searching for his missing child.

The is a great deal of dark wintry foreboding in this film. Does the sun every shine in Russia? It's a relentless and frustrating look at lives that have lost all hope and compassion for each other. Maybe the message is to too deep for the normal movie goer. One thing for sure, it will not help their tourism industry.
(Review by reesa)