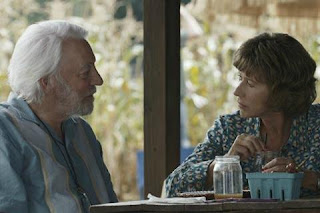 Director Paolo Virzi in his first English-language film, working from a script he co-wrote with Stephen Amidon, Francesca Archibugi and Francesco Piccolo (based on Michael Zadoorian’s novel) is a gentle and affectionate travel log of an elderly couple's last vacation in their beloved RV. The loving couple dealing with health issues embark on adventures that are full of improbable gag set ups and misunderstandings as they travel from their home in Massachusetts to Florida.

Helen Mirren as Ella embraces a touch and go southern accent as the devoted wife of 50 years to her husband John played by Donald Sutherland. John was a well loved English professor who now suffers from dementia. His moments of lucidity are getting few and far between. Ella spends a lot of time trying to keep the memories alive. The pressure grows on her as she is also suffering from some aliment which causes her nausea and she is popping lots of pills. She also drinks a lot of her favorite Canadian whiskey. The RV dubbed the Leisure Seeker was their family get-a-way. Their children Jane and Will (Janel Moloney and Christian McKay) are all grown up and are freaked that their parents have suddenly taken off in the clunky old Winnebago without a word. At each campsite, Ella screens a slide show for John playing their lives, their children, neighbors and his students. Despite John's memory lapses, he is still able to drive the RV as Ella claims she can't handle it on her own. But that doesn't stop him from taking off after a pit stop leaving Ella behind. A motorcyclist gives her a ride to catch up with her clueless husband, who only berates her for riding a bike without a helmet.

John's memory glitches sometimes questions Ella as to who she is and where is his young beautiful wife. Other times, he displays moments of insecurity about one of Ella's old boyfriends that he suspects her of keeping contact. At one point she gets so frustrated, she tells him they will go find Dan (Dick Gregory) who is currently residing in a nursing home and doesn't know them. Ella also finds out by manipulating her husband's into discovering his own indiscretions which angers her so much, she drops him off at a nursing home. When her anger subsides, she realizes that she can't live without him, and he can't live without her. As their physical maladies become apparent, Ella realizes their trip only has one solution.

Mirren who was nominated for a Golden Globe for this role, is delightful as the gregarious Ella. She is personable, friendly and is able to talk to anyone, anywhere, anytime. Her academic husband is more apt to school waitstaff and others with Hemingway which bores Ella to tears. Yet despite their differences they remain so totally in love. Even their son Will felt left out over their attention paid only to each other. One wonders how old age will treat us when our time comes. Will we be able watch the one we love fade and forget?
(Review by reesa)

Email ThisBlogThis!Share to TwitterShare to FacebookShare to Pinterest
Labels: The Leisure Seeker review