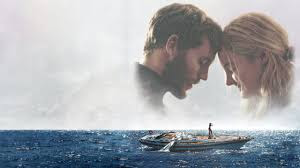 This movie is based on a true story about a young woman, Tami Oldham who decided to move to Tahiti. She was from San Diego. She was very young, with no real work history, no experience and never gave an indication of how long she would be there on the island. She decides to stay there to live and work. While there she finds work cleaning and the boats and yachts. During one of those work times she meets this guy name Robert Sharp who has his own boat and discovers that they have a lot in common. He comes from London England and has this sense of adventure. He tells her of his travel all over the world. Of course, she is fascinated with all his stories and his good looks that she gets involved with him. During one of their many outings Roberts runs into some old friends, an older couple. They know of Robert’s sense of adventure, so they ask if he could help them with their dilemma. They need to return to London immediately because the wife’s father is ill. They offer Robert a deal of life time to return their beloved yacht back to San Diego. For the job they will pay him ten thousand dollars and a first class ticket back to the island. For Robert, this is an idea plan since he traveled a lot on water. Tammy is reluctant because she does not want to return to San Diego. But after proposing to her she finally agrees to go with him. Since the couple luxury yacht was much larger than his small boat they are both impressed.

Robert and Tammy take sails on the water to complete the journey to San Diego. Their journey is like a idea love story of couples traveling the world together. However, their journey takes a turn for the worse when they encounter a hurricane. After the storm Tammy appeared to save Robert and kept him alive while she took care of him and look for ways to be rescued. The story gave the impression that Tammy was handling everything well and that the drift was just a walk in the park. But by the 41st day when she realized that she was going to die and could not take it anymore, she gave up this hallucination in her mind that Robert was still with her. She realized her only source of survival was reliving her early days with Robert and all thoughts of her love for him that lead her through her journey to keep her mind together until she was rescued.

In many ways this story seemed like an ideal love story until it plays out. Although, some of the scenery of the sunset and underwater scenes were beautiful there were a lot of unrealistic things that the director failed to make the movie realistic. For instance, a beautiful young woman like Tammy to leaves San Diego for Tahiti alone, not once did it focus on her survival skills on the island or her need for safety. The movie never states how long Tammy and Robert was on voyage before the hurricane. The days that she adrift only starts after the storm. The story never talks about whether the couple inquire about the yacht once she returned or even considered that they were looking for the young couple. Although the movie seemed to follow a different path of other movies, it failed to deliver something unique or different that would set this move apart from previous movies.
This movie was rated C+.
(Review by Dr. Dwanna Swan-Ary)