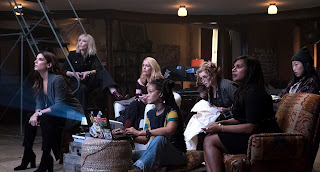 This one is all about the girls.

Whereas the 2001 update led by George Clooney and director Stephen Soderbergh was one of the biggest blockbusters of the past decade, “Ocean’s 8” finds director Gary Ross and star Sandra Bullock as Clooney’s sister, Debbie Ocean.This all new tale has cameos from the 2001 remake with the appearance of Elliot Gould as well as Shaboo Qin. In the 2001 version, Gould was Reuben, one of the right hands of staging the heist while Qin’s Yen persona was the small acrobat thief who helped pull off the caper.

Helping Debbie is Cate Blanchett’s Lou, Debbie’s best friend from years ago. She is a good sounding board for Debbie’s trials and tribulations. Their friendship and interaction keep this movie afloat, despite all the ridiculous cliché’s that sometimes take center stage.

The duo share some great scenes with dialogue, such as when Debbie gives Lou the rundown on how long she’s planned the robbery stating 5 years, 8 months and 12 days. Like Clooney’s character in the 2001 remake, Debbie knows what she’s good at, and that is a robbery, with The Met gala in New York City.

That is only a portion of the script, since the rest of the time is spent with the characters and the dilemmas they each face.

Rounding out the eight are Sarah Paulson’s stay-at home grifter mom, Tammy, who leaves her child alone “so she can get some much needed time apart.”

Also part of the group is Mindy Kayling’s Amita, who helps biding time away from her parent’s restaurant business. Her skill is that of conceiving and implementing face jewelry into the mix, because she feels her skills are put to a better use.

Also included is disgraced fashion designer Rose Weil, whose fall from grace finds her fashioning Anne Hathaway’s starlet Daphne Kruger, whose always on the inside track of finding someone hip.

Also in the group is Rihanna as Nine Ball, (her real name) and Awkwafina as Constance. Each adds a nifty moment of sparkle and pizzazz.

The chemistry between the various members of the troupe all work, especially with a score and theme that harkens back to previous chapters in the “Ocean’s” arsenal.

Director Gary Ross knows how to film actors in their moment with a fluid pace that never hits a dull scene or transition. I hate to say it, but I wanted more. He has done credible work before, most recently with the Matthw McConaughey-led “Free State of Jones” in 2016.

In the full scheme of things, I gave the 2001 remake a grade of an A-, with “Twelve” a less than stellar D-, while “Thirteen” received a mediocre C+.

As I said earlier, this one works, but not to the right degree of vim and vigor.