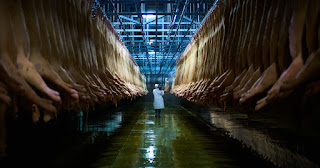 You may wonder if we need another film about the food industry. It turns out that we do. Eating animals is based on a book published in 2009 about the factory farm industry which produces our meat and meets our ever-growing demand for animal proteins.

The film is directed by Christopher Quinn and narrated by actress Natalie Portman and is predictably full of statistics, facts and figures. It also does have its share of images that are difficult to watch, but they are the reality and the filmmaker feels it's important for us to know just exactly where are food is coming.

A brief history of the farming industry is presented and we meet one of the 1% of traditional livestock farmers still in production. He raises turkeys, in Kansas, the old-fashioned way. We also meet the factory chicken farmer in the east and the massive hog farmer in South Carolina. The chicken farmer is under contract and we explore his ethical concerns for how the birds are being raised and how the corporations treat him as a producer. We discover that the hog farmer's methods are contributing to the pollution of the waterways and ultimately the ocean, contributing to fish kills and the development of sores on humans.

We learn how factory farming is contributing to greenhouse gases and global warming. Another talking point is how these animals have been genetically manipulated to grow fast with the least amount of food intake, to meet increasing global demand as our diet spreads to other parts of the world that were traditionally plant-based.

The role of the industry in the development of super bug caused illnesses, that won't respond to antibiotics, is also explored. What is most important is that factory farming not only is not good for the planet, it's not good for the animals, the meat consumers, and the 99% of all farmers who are raising their animals this way. It becomes clear very quickly that there will be a price to pay and in quite a few arenas.
There is a very real danger that the traditional versions of these animals will be lost from this world forever as their numbers dwindle. Today's livestock does not even remotely resemble the livestock from 100 years ago being raised in traditional family farms, and there is a very real danger we will lose these methods in the next generation.

The film delivers its information in a gentle, dignified and informative way. Thankfully, it does not utilize much shock value when addressing the storyline involving the humane treatment of lifestock. But some such scenes are necessary in order for the viewer to get a full picture of the impact the raising methods have on the animals, when cows and pigs cannot move and chickens cannot even bear their own weight on their legs they have grown so fast.

One darker side of the industry involves what the giant corporations do to whistleblowers and former employees who are able to leak information to the outside world about the inhumane treatment and methods used inside the large structures. There is discussion that the FDA is unable to successfully monitor the industries and help bring them back to health due to the power of the large corporations and governmental influence due to corporate donations and donors who want to make sure that their products are heavily promoted and sold to every as many people as possible.

The goal of the film is to make the viewer fully educated and aware, and able to make choices not to eliminate meat from their diet entirely, but to consider alternatives and a reduction in the consumption of animal protein, for the sake of our health and the future of our planet.

The film is hopeful in that it presents developing alternatives to animal protein in the form of plant proteins. The messages are not an attempt to create a world full of vegans or vegetarians but to reduce the total impact the industry has in negative ways as our world population continues to grow. The overall message is our planet cannot handle continuing to meet the demand at this pace and that change must occur. That change lies within each and every human being on this planet and depends on the choices that they make.

Having been able to grow up and have access to a family farm on a regular basis, this reviewer was directly able to observe traditional farming methods in her formative years, with respect to livestock. The current giant buildings that house so many chickens that they cannot move bears little resemblance to the chicken house of my childhood where chickens could freely walk around, eat bugs, and exercise, building up muscle tissue instead of fat tissue. The cows were fed grass and hay instead of corn and feed laced with antibiotics to kill the inevitable bacteria so rampant in the giant pens spanning for miles and guarded by security trucks who quickly run off anyone with a camera.

The call is to encourage the consumer to demand meat sources from and thereby supporting traditional farmers and a call for the few farmers left with traditional knowledge to educate the next generation so we are not so quick two raise that next generation to think that factory farming is the only way. We as a consuming public oh it to ourselves to know everything about where our food is coming from.
(Review by Cheryl Wurtz)