How to Talk to Girls at Parties 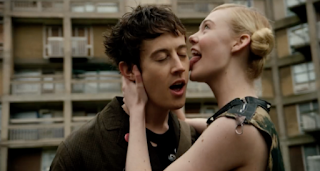 Author and graphic novelist Neil Gaiman's 2006 short story has been brought to the big screen by director John Cameron Mitchell in his first movie in 8 years. The director of “Hedwig and the Angry Inch” (2001) and “Shortbus” (2006) also wrote the script with Philippa Goslett, clearly loves early punk era hairdo's and nihilistic attitudes. Then the story throws some visiting aliens trying to break from their own conformity and embrace this new power of individual freedom. It doesn't make much sense, but it's still charming and entertaining.

Enn (Alex Sharp), a budding cartoonist and graphic artist, hangs out with his buddies looking for Queen Boadicea's (Nicole Kidman) party. They end up getting lost and stumbling into a strange but fascinating old house that is filled with multi-colored costumed characters. Each group seem to embody a section of their group collective. His friend follows the Stella who promise sex encouraging Enn to go talk to a girl. The first girl is wearing a huge glove that hides her middle finger having a split digit. Then Enn connects with a beautiful young woman Zan (Elle Fanning). She is arguing with her group that they should expand their exploration rather than just be tourists. Enn offers's her the opportunity and soon they embark on the punk rock scene. Boadicea decides to take Zan under her tutelage by transforming her into a punk queen.

The 18 page short story does not include most of the poetic license taken here. The aliens are revealed to be indeed travelers, but their times are limited in each new journey. The leader of each group is considered to be the parent/teacher who eat their young when they depart, and then they in turn are eaten by the eldest. Zan's challenge to stop this almost passes, but the time to depart is quickly approaching forcing everyone to continue with their usual practice. The fact that Enn and his friends are not too weirded out by hooking up with an alien visitors is also curious but somewhat expected.

Fanning and Sharp are very agreeable as the young couple. While Nicole Kidman as the punk diva is played for all it's worth. The soundtrack is notable and keeps the energy up. The aliens in their color coordinated vinyl costumes are very kitchy and screams the 60's. Each group represents elements of a whole person, like the brain, heart, sex, etc. Where they originated, and how they travel from place to place is never explained. The ritual of "the eating" becomes the punk song in the middle of the movie. Just don't try and make sense of it all, and just enjoy it.
(Review by reesa)

Posted by Dallas Movie Screenings at 8:28 AM

Email ThisBlogThis!Share to TwitterShare to FacebookShare to Pinterest
Labels: How to Talk to Girls at Parties review