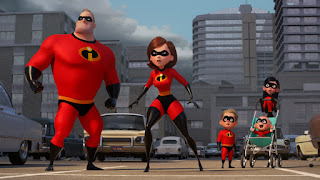 Round “2” for Pixar’s The Incredibles!
If you ask me, I’m a sucker for one big thing: Walt Disney animated films.

What I’m saying is after 14 years of waiting to see what’s next, it’s finally here. The family of supers in Incredibles 2 has come to life onscreen with Brad Bird, who previously directed his three critically-acclaim films The Iron Giant, The Incredibles, Ratatouille, and his most recent film, Tomorrowland, returns to his post at Pixar Animation Studios to helm this anticipated animated feature. As the filmmaker, Bird takes charge of storytelling ideas. This comic-adventure picks up immediately after the first film. A simple, yet energetic news came when the characters are ready to continue to fight back for justice. This time, they’re doing this just to get all the supers and themselves accepted by society again like it was before.

The film involves Helen Parr going out on the secret crime-fighting mission to bring back equality to any supers and finding a way to get the supers accepted to the world again while her husband Bob Parr, known as Mr. Incredible, has to stay home and be a mindful househusband to the kids. While on a mission, Helen discovers a villain hacking into every system and brainwashing the citizens and the other supers to wipeout supers once and for all. Helen must find a perpetrator to restore glory.

Nuff said on the kids with high speed heist, force-field productions and multiples of powers coming from the baby. These kids’ characters got some real fiery roast when trouble is happening. When I look at the movie poster, I saw a raccoon appearing in this movie and mistook this as Rocket Raccoon from Guardians of the Galaxy films. What a sight!

Bird, along with the producers John Walker and Nicole Paradis Grindle and executive producer John Lasseter, have done an incredible job of keeping the longest track of storytelling. He will not make a sequel or film that would be terrible according to the critics and audiences. This explains why the plot looks very similar to the original film but in reverse with Elastigirl’s main role. It would have been too many puzzle pieces to solve under a timely manner. Once the puzzle was complete, story ideas came to light up their days. Even when the very beginning of the film gives me mighty laugh.

Featuring the returning cast of Holly Hunter, Craig Nelson, Brad Bird, and of course Samuel L. Jackson, who was best known as Nick Fury in the Marvel Cinematic Universe, they have done an amazing, mindful job of providing the best familiar voices from the original film to create more like a “floating timeline” personality compared to Spongebob Squarepants, Fleischer Studios’ Superman cartoons, Pokémon cartoons, and Disney’s Alice shorts from the very early ages. Floating timeline is the best tool Pixar has ever use to create more depth just like cartoons on television. Also a better job for supporting actors Jonathan Banks, Bob Odenkirk, Catherine Keener and the newcomer Huck Milner (the voice of Dash).

Not to mention the Michael Giacchino’s composing, which sounded remarkable for the continuation of the film and the reuse of the original film’s soundtrack. The music has brought the audiences not only a strong feel but also nostalgic twists and themes from the story and background as many folks who have grown up watching the original film which made this film became incredibly sensational. His compositions are as ageless as those works from Hans Zimmer and Alan Silvestri.

As a big Pixar fan, this film was twice as incredible to watch. Easy attentive for movie goers who grew up watching the Incredibles. I highly recommend this film not only for children and grown-ups, but also parents. My main thought about this film is that the box-office projections for this film would earn bigger stacks of money since people been waiting for this film for years. This is the best bet for a summer movie decision for you out all the films releasing in June/July. Let me remind you that this is Pixar’s 20th film release and the second-to-last sequel. The last sequel [for now] is Toy Story 4, which comes out in June 2019. So please enjoy the sequels while they last before the studio decides to move on to original storytelling ideas. But if you don’t like Incredibles 2, go back to watch the original film for your own perspective of originality. I promise you this film will make your lives easier.

Let’s not forget the short film, Bao, directed by female artist Domee Shi, involving a lonely mother making dumplings as a symbol of motherhood. The short film from Shi offered some strong message of motherhood about parents spending time with their kids as they grow up to have their own lives. Makes me tearful and it’s tough to see this coming unexpectedly.

Bonus points for the red signal on the Disney and Pixar logo.