Sicario Day of the Soldado 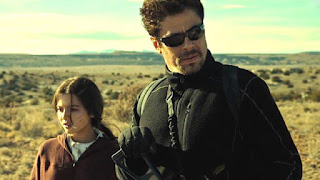 The original “Sicario” released in 2015 was an amazing well-crafted tale that actually made my ten best list of that particular year.
This follow up in the “Sicario” saga finds our antiheroes played by both Oscar-nominated Josh Brolin and Oscar winner Benicio Del Toro reprising their roles from the original flick. Del Toro’s Alejandro character was the muscle of the group, even taking out an entire family for their involvement in past indiscretions.

Brolin returns as a high ranking FBI man Matt Graves, who is given a clean slate to run a no holds barred operation. He feels that more will get done since the federal government gives him a blank check to do whatever he wants.

Missing is the female lead occupied by Oscar nominee Emily Blunt. Instead, the woman with a high position of power is played by the Oscar-winning “Get Out’s” Catherine Keener as the mean and malicious Cynthia Foards, who does not care about high body counts. She does not care about human life in the very least, since to her they are just numbers on a wide spreadsheet.

Alejandro’s past comes into play when he befriends a Mexican family with a deaf caretaker. Earlier in his life his own daughter was deaf so he learned how to talk via sign language.

The directing chores here are done by little known Italian filmmaker Stefano Sollima, who helmed “A.C.A.B.,” “Suburra” and TV’s “Gammorah.” His lens in “Sicario: Day of the Soldado” perfectly captures the dusty chaos of everyday Mexico wherein a local shopping mall serves as a backdrop for this fluid and dynamic tale that does not disappoint in the very least.

Returning from the original “Sicario” as well is writer Taylor Sheridan, who was as Oscar-nominated for “Hell or High Water” in 2016. Sheridan’s pen alludes to some great wordplay, something I admire in filmmaker David Mamet, going back to his superb script for the Oscar-nominated “The Verdict” in 1982 and even like a writer such as Cormac McCarthy, who shared Oscar-winning writer duties with the Coen brothers, Joel and Ethan, for 2007’s Best Picture winner “No Country For Old Men.”

This was a great flick because it sets aside normal conventions and offers something that is just plain gritty.

What was real and intriguing in this action-suspense-drama-thriller hybrid is just when you think it’s going to shift off course, both Sollima and Sheridan throw you off the beaten path to end with yet another great “Sicario” tale. Like what has happened with the “Die Hard” entries, I like and admire the fact that roman numerals are not prevalent in further “Sicario” stories.