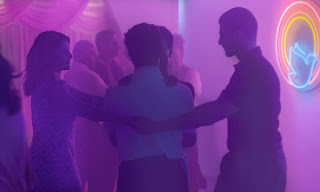 In 2027, Brazil – according to the nameless child narrator of “Divine Love” – has become a deeply religious nation. Neon signs making proclamations of religious propaganda cut through the hazy darkness, illuminating stages where Christian music groups perform for massive audiences as part of the celebration of “Supreme Love” which has surpassed Carnaval’s importance to the people.

Against this backdrop, the story of Joana (Dira Paes) is told. Joana and her husband, Danilo (Julio Machado) wish to have a child, a prayer they’ve communicated to God multiple times without avail. As it turns out, Danilo’s sperm is no good, forcing the man to suspend himself upside down in front of a UV light intended to improve his fertility. Matters aren’t helped by the fact that every building in Brazil now seems to have a body scanner, which keeps track of whether or not the citizens are registered and, if they are female, whether or not they are pregnant and have registered the fetus, attached to each entry and exit door, a constant reminder to Joana of her current barren state.

Joana considers herself to be a devout citizen, frequently found attending a drive-thru church where she confesses her concerns to its pastor (Emílio de Mello). As devout as she claims to be, Joana is a meddlesome woman, taking advantage of her position within the government – she files divorce papers – to attempt to keep unhappy couples together. Often pushing those soon to be separated into joining a group that she’s a part of called Divine Love. Early in the movie, she receives a personal package in the mail, a gift (for which she’s reprimanded) from a previous couple she prevented from divorcing by enticing them to join Divine Love.

Taking an unexpected turn for a movie that continually pushes religion, director Gabriel Mascaro’s film features multiple scenes of explicit sexuality. Divine Love is a cult-like group. After an initial larger group meeting, where each member reads aloud from scripture, each couple pairs up with another couple for a private session where they trade spouses. In an unbroken shot with the voyeuristic camera positioned on the far side of an erotically lit neon-pink room, we observe as Joana and Danilo engage in an elongated sexual encounter with another couple, switching partners at the last possible second. The exact direction of “Divine Love” isn’t instantly realized, though after a while most will probably quickly guess the direction the story is heading.

“Divine Love” is a fanatically shot film accented by a synth-heavy score. Mascaro creates a dream-like atmosphere through the usage of foggy, neon-fused photography, seducing the audience with the camera. Paes does a good job of portraying Joana, effectively showing the woman’s confused piety. But, despite its well-made production, “Divine Love” feels lacking. There’s probably a deeper meaning to all of this but as someone unfamiliar with Brazil and its culture, that goes over my head.
(Review by Bret Oswald)