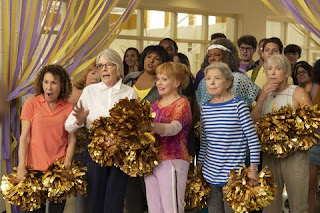 Poms is another gender-centric comedy only this time it involves older, mature, post menopausal women. The filmmakers pepper the story with predictable and embarrassing stunts, then somewhat embracing the physical quirks of aging while trying to relive their younger selves. Directed by Zara Hayes who wrote the script with Shane Atkinson, it sets the location in a plush retirement community in Georgia. Obviously the residents there are well heeled enough to afford the cookie cutter homes and all the amenities that one cannot get on Social Security alone.

Martha (Diane Keaton), a retired teacher, sells all her worldly goods from her apartment in NYC, and drives to Sun Springs, GA after canceling her doctor's appointments and chemo treatments for her ovarian cancer. When asked why she moved to Sun Springs, she dryly says she came to die. She is greeted by the welcoming committee lead by Vicki (Celia Weston) who spells out all the rules including that she is required to join one of the many clubs or create her own. She meets her new neighbor Sheryl (Jackie Weaver) who runs a loud poker party and then calls the security chief (Bruce McGill) on them. Despite that, they become quick friends. Sheryl encourages Martha to start a cheer leading squad to fulfill her past passion that she had to give up to care for her sick mom. The silly auditions include Pam Grier as Olive, Rhea Perlman as Alice, Phyllis Somerville as Helen, Carol Sutton as Ruby, Ginny MacColl as Evelyn, and Patricia French as Phyllis. At rehearsals they have to make a list of their ailments and limitations since age is a harsh mistress and the simple routines are difficult. Vicki, takes a dislike to Martha's team as she thinks they should do something more age appropriate, then bans them from using the community center to practice. Sheryl, who teaches part time at the high school manages to get them a performance space, but it's at the school's spirit rally. Helen ends up breaking her leg. Someone posts their ridiculous efforts on social media which becomes a viral hit. Vicki says they don't shine a good light on their community and dissolves their standing as an official club. Helen's son decides he and his wife are moving in with her so she can't get into any more trouble.

Martha and Sheryl confront Chloe (Alisha Boe) who filmed it, although it was her friend and fellow cheerleader who posted it. She feels horrible about it. The older women blackmail her into choreographing their routines. Ben (Charlie Tahan), Sheryl's grandson who is secretly living with her, because no one under 55 can live at Sun Springs, is recruited to mix music for them. Since they cannot perform at the talent show, they decide to enter a cheer competition in the 18 + category. The bonding of the women, young and old despite the increasing pain that Martha is enduring quietly is what keeps her from hiding away waiting to die.

It's really great to see women of age and color represented in films even if they are slightly stereotyped. The quality of the cast allows each one to shine in what little of written of their characters. Any male characters are kept secondary in either supporting their women or trying to keep them down. Female relationships in films are usually presented as bitchy, competitive teens, insecure young women with biological ticking clocks, while older women are left with nothing to do but support their children. It's nice to see them enjoying friendships and sharing the love and knowledge they have experienced over the years. Life is short, enjoy it while you can.
(Review by reesa)

Posted by Dallas Movie Screenings at 10:36 AM