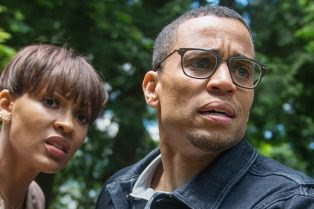 In director Deon Taylor’s “The Intruder,” young married couple Annie (Meagan Good) and Scott Russell (Michael Ealy) decide it’s time to buy a house and start a family. Wanting to buy a house outside the city, the Russells go to look at the expansive home and estate of Charlie Peck (an overly manic Dennis Quaid). Charlie has lived in the massive house alone since his wife died (of cancer) two years prior and now plans to move across the country to live with his daughter in Florida. Annie, a country girl at heart, falls instantly in love with the house. Scott, a successful partner in an advertising agency, denies Charlie’s steep asking price, $3.5 million, but agrees to buy after a slight discount, $200,000, is offered. To paraphrase Charlie, “You wouldn’t be looking here if you couldn’t afford it.”

Unfortunately for Annie and Scott, Charlie has become quite attached to the house. Although Charlie has told them of his intentions to move, he doesn’t. He continually drops by to check on things or to lend a helping hand – mowing the yard, helping to hang Christmas lights. Annie, surprisingly still very naïve, isn’t so bothered by these things. She thinks that Charlie is just having a hard time letting go and insists that Scott be kinder to the man. Scott, on the other hand, is instantly put on edge – mostly due to their first encounter with him involving the shooting of a deer and Scott’s history with guns – warning his wife that she should stop being so nice to Charlie. She doesn’t listen and the situation starts spinning out of control.

Characters are all one cliché or another. Scott is the typical macho, protective husband, poorly portrayed by Michael Ealy who seems so artificial in the role. Dennis Quaid’s role, and his performance, isn’t any better. From the start, it’s apparent Charlie is deranged. There’s no hint that the man might be sane as the film inanely and predictably winds its way to its inevitable final encounter. And Annie is just so frustratingly naïve (you’d think that she’d pick up on what’s happening sooner). The preview audience vehemently reacted to one of her dumber decisions towards the movie’s conclusion. Despite her moronic character, Meagan Good’s performance fares the best among the main cast.

One of the nicest things I can say about this thriller is that the photography (at least for most of the movie) is nice. Frame compositions are well-composed. After Scott carries Annie across the threshold of their newly purchased home, cinematographer Daniel Pearl focuses on them through bar-like structures within the house – filming down on them from behind the upstairs railing, through the panels of the windows – visually showing that their new home is soon to become something more formidable than they anticipated. The third act falls apart visually. The final showdown between the Russell’s and Charlie is a jumbled mess. The camera shakes and bobs and action becomes near indecipherable, more than likely to show Charlie’s disturbed mental state.

The film’s conclusion goes on for far longer than it should. There comes a point where the movie could have satisfactorily shifted into an epilogue. Instead, screenwriter David Loughery continues the young couples’ ordeal, stretching out a movie that already over-stayed its welcome.

Sometimes these types of thrillers can be fun, offering viewers some B-level entertainment even if the movie isn’t very good. Not so with “The Intruder.” As far as horror movies and thrillers go, it’s pretty tame – not thrilling and not even remotely entertaining. Hopefully anyone interested in seeing it hasn’t already seen the trailer – highly unlikely if you frequently go to the theater – because, yet again, the advertisers have seen fit to distill the entire movie into a two-minute short.
(Review by Bret Oswald)