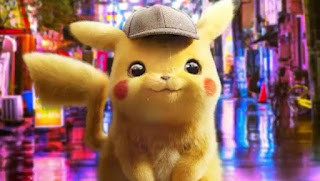 Just so readers know, despite the marketing push and publicity, this is not at all a kid's movie. “Pokémon Detective Pikachu” finds Justice Smith's (I enjoyed what he did in last year’s non-Transformer movie “Bumblebee.”)

In Detective Pikachu, his character returns home after a long absence from a place he left many years ago. The trouble with the movie is rests’ in the fact it does not know where to go.

There is a great scene in Penny Marshall’s “Big” when an adult Josh Baskin (Tom Hanks) comments on a giant skyscraper into a tall monster and states “I don’t get it.” That is exactly how I feel about the whole Pokémon craze that has been around for years. It means something great and grand for kids, but for me I could honestly care less.

Honestly, I know there are people in the world who relish this stuff, but in my life it is nothing more to me than sheer nonsense. What was cool was seeing Ken Watanabe in a role of substance and grit. He is a great character actor who easily encapsulates ant role he plays.

He plays a character who was Reynolds’s partner

Ryan Reynolds is a household name because of his time as Deadpool in a couple of X-Men related entries, including the disappointing “X-Men Origins: Wolverine” in 2009. He made up for it by headlining both “Deadpool” in 2016 and the equally fun “Deadpool 2” in 2018.

In “Deadpool 2,” Reynolds re-visits past mistakes and tries to erase both his appearances in “X-Men Origins: Wolverine” as well as that fiasco that was Martin Campbell’s disjointed “Green Lantern.” I like him as both a personality and as an actor.

I even laughed with him in the sophomoric comedy “Just Friends” wherein even his clueless would be girlfriend in Ana Faris’s Samantha James is such a nit-wit that she does not even know how a microwave works. She does not realize that aluminum foil affects the way in which food is cooked.

For all the colors present in the movie, as both a moviegoer and paying patron I cannot recommend this movie at all.

Posted by Dallas Movie Screenings at 10:39 AM