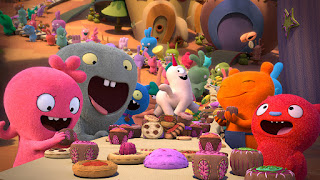 Kelly Clarkson is everywhere lately. As a judge on The Voice, host of the Billboard awards, soon to have her own talk show, and now the lead character of an animated film, UglyDolls, which is based on a toyline of the same name. Directed by Kelly Asbury and written by Alison Peck from a story by, of all people, Robert Rodriguez. It's a brightly colored kids movie featuring original music from Kelly Clarkson, Nick Jonas, Blake Shelton, Janelle Monáe, Bebe Rexha, Pentatonix, Anitta, and Why Don't We. The film's score is composed by Christopher Lennertz while songs are written by Lennertz and Glenn Slater. The soundtracks lead single, Broken and Beautiful, sung by Kelly Clarkson was released prior to the film's opening.

Uglyville is a little community made up of doll rejects. They are lead by the unofficial Mayor Ox (Blake Shelton) who tries to discourage Moxie (Kelly Clarkson) from her hopes of "The Day" to find a child to love her. She is persistently in a good mood and encourages her friends to find a way out of Uglyville to discover the world outside by taking her fate into her own hands. There is her best friend Pitbull as Ugly Dog, Wanda Sykes as Wage, Wang Leehom as Lucky Bat, and Gabriel Iglesias as Babo. They get caught up in Moxie's enthusiasm and tenaciousness. They discover The Land of Perfection led by Lou (Joe Jonas) who puts the human looking dolls through the test of the Gauntlet before they are allowed to find their child in the real world. He is revolted by the UglyDolls because of their imperfections. They are befriended by another perfect doll named Mandy (Janelle Monae) who is not considered totally perfect because she wears glasses. Lou has Ox kidnapped and forces him to confess to the UglyDolls that their community was created because they were rejects. Ox hid this secret and tried to discourage the stories of the big world. The whole town becomes zapped of their hope and happiness until plucky Moxie decides to give it another chance thanks to Mandy who encourages her not to give up.

The obvious theme of the film is acceptance of our differences and to embrace our imperfections. Even Lou who everyone thought was the most perfect of the dolls has his own problems and insecurities. Of course he gets his karma payback when he loses the total adoration in the Land of Perfection including the mean girl dolls consisting of Tuesday (Bebe Rexha), Kitty (Charli XCX), and Lydia (Lizzo). At times it's seems like an overly long commercial to boost plushy sales on UglyDolls strung together by catchy tunes to support loving one's self and others. It's a big neon colored balloon of fluff and perfect for Netflix rainy day mindless breaks.
(Review by reesa)