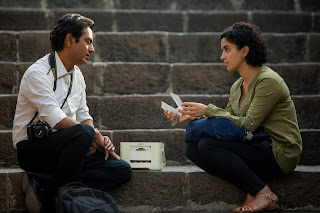 While the world is filling the theaters of the big blockbusters of the season, the small foreign films slip through the cracks. Don't let this one pass by! Written, co-produced and directed by Ritesh Batra, Photograph had it's world premiere at the 2019 Sundance Film Festival and the European premiere at the 69th Berlin International Film Festival that drew positive reviews. It's a sweet quiet romantic story set in several locations in Mumbai that gives western audiences a glimpse in a sociocultural lens.

The story begins with a struggling street photographer Rafi (Nawazuddin Siddiqui) who offers photos of people coming off the ferry to commemorate their journey at Mumbai's Gateway Monument. He takes a picture of a shy student, Miloni (Sanya Malhotra) who takes off without paying him. Rafi works day and night trying to pay off an old family debt that lost his grandmother's house. Everyone from his neighborhood seems to know his business telling him that his beloved grandmother (Farrukh Jaffar) is sick, refusing to take her medicine because she wants him to finally settle down and get married. Not wanting an arranged marriage, he impulsively sends her Miloni's picture hoping that it would keep her from bugging him. But she decides to come stay with him at the room he shares with several men. Rafi tries to track down Miloni when miraculously he finds her picture on a billboard advertising her school. He asks her to pose as his fiance and amazingly she agrees. Miloni's middle class family is also trying to arrange a marriage for her. She is studying to become an accountant because her parents expect her to be, but it's not her dream. She really wanted to be an actress.

The budding respect and attraction of the May-December relationship of these class diverse characters is slowly explored without the slap stick of modern U.S. cinema. Miloni questions their maid who sleeps on the floor of their kitchen pantry about village life. While Rafi tries to track down a cola that had gone out of business that Miloni said she used to drink with her grandfather. Perhaps taking the formula from an older gentleman who kept a small batch of cola going for his wife and opening up his own factory as urged by his grandmother. Because of their meeting, their world's open up a different way of how they see the world. The cinematography by Tim Gillis and Ben Kutchins brings the viewer into the beauty of the city of Mumbai just as Rafi and Miloni begin to see their environment from a different perspective. It's a movie that will stay with you after you leave the theater.
(Review by reesa)