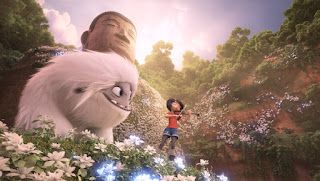 Sure, you can say don’t judge a book by its cover in many levels. For this one, you can say don’t judge a movie by its name. This all comes down to this finely, but not-so-bright animated feature that takes a good crack on the visuals, the CGI, and the special effects usage throughout the film. This film cast includes the voices of Chloe Bennet (Marvel’s Agents of S.H.I.E.L.D.), Tenzing Norgay Trainor (Liv and Maddie), and Albert Tsai.

Years ago, DreamWorks Animation have been on a restructuring process since they decided not to release more than two films per year, the acquisition of Universal Pictures, and delaying several productions in line for upcoming release dates or indefinite period of time. Filmmakers, studio executives, and animators fear that crafting a film could be much harder and a tricky business when creating an idea in the head to make a very strong and thoughtful storytelling for audiences and critics to be motivated from.

In Abominable, Chloe Bennet’s character Yi finds a young, lonely Yeti who was seen hiding throughout the city to prevent from being seen by a power-hunger scientist and a wealthy man (voiced by Eddie Izzard) who are obsessed with capturing the Yeti. Yi, along with her two misfit friends, must embark on a quest to bring the Yeti home, which happens to be Mount Everest.

There was a 2015 film called Everest, directed by Baltasar Kormákur, featuring Jason Clarke, Josh Brolin, John Hawkes, Sam Worthington, and Jake Gyllenhaal. That film really stood out on the similarities between those characters and these characters in Abominable, except that the fact of one thing that loving a family serves as a main dynamic for both films. If you haven’t seen this film, watch it before you can watch Abominable.

I have two things from the movie that are not seem to be as enjoyable: the plot of some points, the plot was cringey as the storytelling really didn’t add up to its levels for the characters and their behaviors when it comes to traveling, performing any action throughout. It’s just how an ordinary human can put more strength and determination to satisfy his or her wants and needs.

Rupert Gregson-Williams’s music comes and goes for Yi’s character and her adventures with some good melody, a smoothing sound, and culturally balance on the tip of the tone and voice.

My favorite parts of this film is film’s diversity and comedy being supported with Yeti and Albert Tsai’s character Peng who had a similar taste and input on the Edwyn "Eddie" Huang character in ABC’s Fresh Off the Boat.

Abominable is an okay, I didn’t hate it, but the film is just doesn’t reach to its potential on other DreamWorks’ other animated films that achieved success on the box office and for film critics in general. Culton really put effort on this film and cast made their characters unique. But the film really lost some magic right there and even when all the colors are present and being spread around the movie, I cannot recommend this movie at all as an adult moviegoer, but for kids, they might love it. And that’s all I going to say.