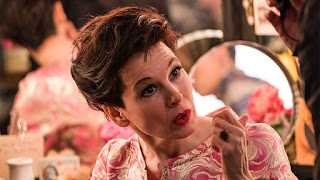 JUDY is a biopic centered around the early and latter performing years of the iconic singer and actress, Judy Garland. As most know, Judy died before her time at age 47, addicted to pills, cigarettes and alcohol. She took her incredible voice and screen acting skills with her, leaving behind a couple of ex husbands and three children.

The movie chooses to focus primarily on Judy's last year or two, when she was broke, with no home, just trying to keep her family of three together after splitting with husband, director Luft.

It seems that most of her life was spent careening towards this cross road of sink or swim. Demand for her talent had waned in the United States. She has found it hard to find anyone who wants to work with or hire her, after frequently showing up under the influence and sometimes not at all. Her lack of professionalism and the difficulty many found with working with her also did not help her stories career.

As Judy goes through different challenges, she flashbacks on her early year, when under contract to MGM, whose president, Louis B. Mayer, controlled nearly every aspect of her life and treated her as a seasoned adult cash cow. She was overworked, underfed, given uppers in the morning and downers at night. Even her social life was scripted and controlled. It is evident in the film, that the experiences of her youth set her up for the addictions and lack of coping skills of her adult life.

Renee Zellweger is magical in her portrayal of Judy and captures her unique gifts in ways that pay tribute to the unique star. Her movements, facial expressions and singing voice are close enough to evoke memories but not so different that it's distracting.

Playing a tour de force of the stage takes a major commitment to research and there is already Oscar buzz for Renee. All of the costuming is painstakingly created and period lovely, as Judy takes on a five week sold out engagement in London at The Talk of the Town, where she is still seen as the icon she always was. The relationship she develops with her assistant/handler is engaging to watch develop and unfold. Her goal is to make enough money to go home and buy a house for her and her children to live in. In the process, she finds a much younger husband (Finn Whitrock) whose pipe dreams promise her eventual financial independence for them both.

Throughout the film, it is evident that Judy is an eternal adolescent, always in need of someone, anyone to care for her. From Mickey Rooney, in the beginning to her last husband, in the end, her fragility is always the undercurrent beneath her great talent and stage presence. It's heartbreaking to watch even if there are moments of glory interspersed in all the struggles. It is one to see, especially if you were or are a fan. Be prepare to be treated to renditions of several of her standards.
(Review by Cheryl Wurtz)