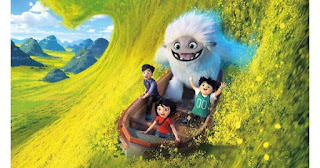 DreamWorks Animation and Pearl Studios produced the computer animated feature written and directed by Jill Culton and co-directed by Todd Wilderman. The adventure features the Chinese countryside as three cousins living in Shanghai attempt to help a young Yeti find his way home to Mt. Everest. It's nice to see that finally some of the characters are actually voiced by Asian actors since the story is set in China.

The story begins as a Yeti breaks out of a laboratory of a rich corporation led by Mr. Burnish (Eddie Izzard) who wants to exploit his discovery. Yeti finds shelter on the roof where Yi (Chloe Bennet) hides out in her she-shed. Since her dad died, she dreams of traveling to all the places from where he sent her postcards. Yi has basically withdrawn from her mom and grandmother Ni-Ni (Tsai Chin). Even her little cousin Peng (Albert Tsai) misses her company. She spends her days working various jobs to earn money for her travels. On the roof playing her violin that was given to her by her dad, she hears the Yeti huddling in fear when helicopter with search lights fly over the rooftops. She quickly discerns that the creature is in hiding wanting to go back to Mt. Everest when he looks expectantly at a billboard with a picture of the great mountain.

Peng and his social media obsessed older brother Jin (Tenzing Norgay Trainor) get involved with her plan to help the Yeti. Jin is very reluctant but in he is trying to keep Peng from trouble. He had called the cops in his fear, but when the corporate security team appears they all go on the run. They hide out in a container full of soda pop which is loaded on a ship destined to a spot up the river. The bad guys follow the trail of empty soda cans.

There are some enchanting visuals as Yeti who they call Everest uses his magic to help them escape. Creating a huge wave from a vast field of grassland. Causing gigantic blueberries that rival Willie Wonka. And using dandelions plumes to take out drones. At the Leshan Giant Buddha statue in Sichuan Yi and Everest create beautiful blooms to the soundtrack of an odd choice of a Coldplay tune. These are the best parts and the most fun. The typical story of the kids coming to appreciate each other while the evil corporations that want to use and destroy any wonders in the world for personal and financial gain is somewhat un-extraordinary. The art work is pleasant and easy on the eyes. It's fun for the family although there are some violent ends to some bad guys which seem to be excused by having them deserve it. You will be tempted to go and get some bao afterwards.
(Review by reesa)

Posted by Dallas Movie Screenings at 11:28 AM