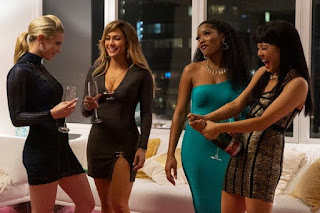 The new Jennifer Lopez movie is not a showpiece for her entirely. Rather, it is about dancers and the con they each pull on their clients. Lopez is just part of the ensemble, that includes Constance Wu (“Crazy Rich Asians”), Vanessa (Vanessa Aspillaga), Lili Reinhart, Carli B and Keke Palmer. Also included is Elizabeth, (Julia Stiles “Save the Last Dance, “10 Things I Hate About You””) doing an expose piece on all the shenanigans the group encountered.

“Hustlers” works only part of the time, since the entire storyline lacks focus on where it wants to go. The best part involves an entire sequence wherein, the troupe gathers around the holidays and Christmas.

“Hustlers” falls into the category of being “based on a true story.” Sure, this is an intriguing aspect, but it does not mean I have to like it. It did hold my attention, but for a portion of the time I was actually bored.

“Hustlers” wants to have shock value, but even with the existence of Paul Vehoeven’s NC-17 “Showgirls,” there is just something missing in the mix altogether. There are portions that are intriguing, but in the end, “Hustlers” is like a giant peanut butter and jelly sandwich that is missing a key ingredient.

“Hustlers” was helmed by Lorene Scafaria, who did a decent job with the camera. Besides the parts where doldrums settled in, the rest of the movie actually works. Great support came in from Oscar-winner Mercedes Ruehll, who plays Lopez’s mother, only referred to as Mother. She bartends where Lopez’s Ramona works.

Also intriguing to the plot are the familial plot points involved, since Wu lives with her grandmother, (Wai Ching Ho). The scenes with both Wu’s “Destiny strike the right chords for her part of the tale.

As a point of reference, in comparison to Andrew Bergman’s “Striptease,” (1996) wherein Demi Moore was a topless dancer dealing with cads and lotharios in Florida. I did not hate that movie as much, since Ving Rhames was great as well as Burt Reynolds had some great scenes and lines.

I really wanted to like this movie, but in the end, I just gave it a shrug of the soldiers with a “meh” response and say I’ve seen better, and I’ve seen worse.