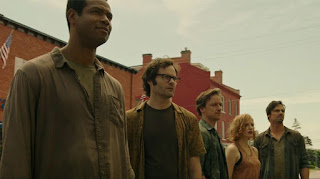 I am not a fan of horror movies. The exceptions are front and center here since it involves Stephen King, John Carpenter and Guillermo Del Toro. King’s movie adaptation track record has improved lately, since cinematic result are distilled from his novels. Filmmakers sometime take his words and manipulate them to just the right degree.

King hopped in the director’s chair for one movie titled “Maximum Overdrive” in 1986. It stunk. On the A-F scale, I’d probably give that one a D-. It was dumb, inane and ridiculous, but sure was a lot of fun. Chalk this one up as a guilty pleasure.

In the 1990 made-for-TV “It,” villain, Pennywise (Tim Curry) was creepy as the dancing clown. It was a first of its eerie kind, though. I don’t know what it is, but I am one of the few people who finds clowns altogether creepy. I think it even goes back to Tobe Hooper’s “Poltergeist” (1982), wherein a clown threatens a little boy’s life.

Flash forward to years later and the world is introduced to Bill Skarsgård’s creepy Pennywise. He sometimes swallows the kid’s whole head.

In this year’s version, Jessica Chastain is Beverly Marsh, who faced Pennywise (Bill Skarsgård) many years earlier. She was part of The Losers Club, a close-knit group of friends who thought they extinguished that diabolical clown long ago. Pennywise, however, is still bringing harm to many innocents, particularly pint-sized children.

This second chapter does an adequate job of intertwining the two parts in having flashbacks from the time they were kids in Derry, Maine.

Chastain’s character is also part of the Losers Club, along with Bill Hader, James McAvoy, Isaih Mustata and James Ransome.

One of the interesting aspects of this tale is that borrows dialogue directly from John Carpenter’s “The Thing” (1982). When one of the characters sees a headless creature that is turned into a spider and says, “You’ve got to be expletive kidding me.” In the Carpenter update, David Clennon said that with a straight face.

Returning for “It: Chapter Two” is director Andy Muschetti, who helmed 2017’s “It” as well as the creepy “Mama” in 2013. As a director, he knows when to pile on the scare factor. It’s a tension grabber for the viewer. The sequel is a long one, though, running two hours and 50 min.

Most horror flicks come and go fast, almost like food at a drive-through window. This one wants you to just park awhile and enjoy the entire experience. By no means, is this a slow-burn horror entry.

This to me is ridiculous, but in the end, “It: Chapter Two” makes the whole experience is worth the time and energy.