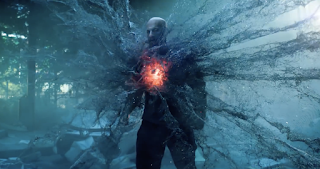 “Bloodshot,” directed by Dave Wilson, is a by-the-numbers action movie that manages to be moderately entertaining in spite of itself. Vin Diesel plays marine Ray Garrison who, along with his wife (Talulah Riley), is kidnapped and murdered while on vacation. The killer (Toby Kebbell) and his cronies take Ray and his wife to a meat locker in an attempt to torture some information out of Ray. In a cheeky sequence, he dances his way to Ray before starting his interrogation. Yes, the scene is as cliched as it sounds.

For Ray, death is not the end. A group of scientists, led by Dr. Emil Harting (Guy Pearce), enhance his body with nanotechnology, turning Ray into an indestructible super-soldier. Whenever he is injured the nanobots in his body instantly heal him. This ability is first demonstrated by Dr. Harting cutting Ray’s hand open; tiny machines, created with the help of some cheap-looking CGI, emerge from the gash and quickly repair the wound. At first, Ray remembers nothing, but soon his memories come flooding back, instigating an escape from the facility and a search for his wife's killer.

Wilson takes things slow, allowing the viewer to get acquainted with Ray’s new world before getting to the main storyline. It’s too bad that this build-up phase has been spoiled by the film’s marketing. "Bloodshot" is another movie that’s had too much of the plot revealed by its marketing. Most viewers will already know what’s to come, for those who have someone managed to avoid the trailer I won’t say what that is. Thankfully, the movie doesn't focus as heavily on this aspect as the trailer suggests.

The movie is on the clunky side. Wilson handles the action sequences in a sloppy manner. Shots are hectically edited together, creating set pieces that can come across as incoherent at times. There are several slow-motion shots thrown into the mix so the filmmakers can show off the effect of Ray’s body healing itself, again with the help of some not-too-convincing CGI. Even the movie’s score does little to aid the action. It creates a droning effect, a constant barrage of noise that doesn’t establish any tension for the story.

Despite all this, “Bloodshot” still manages to be somewhat enjoyable. There are some well-timed jokes included from the supporting cast, as well as some lame ones that don’t work. Wilson paces his movie well enough to keep it from becoming too dull though the film starts to wear thin by its chaotic finale. Thankfully, by the time it gets to this point, it’s easy to tell that it’s close to being finished.

Obviously, the filmmakers hope to start a new franchise with this movie. I don’t think it’s strong enough to warrant any expansion. It’s fine as a stand-alone work but I don’t see audiences clamoring for more of this in years to come.
(Review by Bret Oswald)