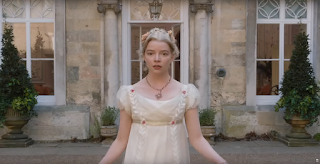 This Jane Austen tale has been done before, but somehow filmmakers have an idea of how to put a new spin on it making it more accessible for the masses.

This new version features Anya Tyler Joy of both the little seen “The Witch” from 2016. She then supported in M. Night Shyamalan’s “Split” from 2016. She also appeared in “Glass” from last year. With this, Shyamalan was able to complete his trilogy he started a decade ago with “Unbreakable” in 2000.

Now with this “Emma.,” this Austen led tale finds Tyler Joy’s Emma Woodhouse finding romance for people other than herself. Besides herself, she looks after dear old dad, Mr. Woodhouse (Bill Nighy).

I would like to go back to director Douglas McGrath’s re-telling of “Emma” in 1996. McGrath did a great job of telling it for the time. Gwyneth Paltrow was great in the title role, since I think I even had it on my ten best list for that particular year.

Directing chores for the new installment of “Emmma.,” were handled by Autumn de Wilde. After helming a variety of short films, this marks his first full-on foray into features.

He has an aptitude for turning this into a noteworthy entry that delivers in every single department.

He knows when and where to place the camera set-ups for his engaging and pleasantly done tale. Tyler Joy has a firm grasp on the dialogue with a firm grasp on how everything works.


Grade: B
(Review by Ricky Miller)