The Simpsons’ Playdate with Destiny 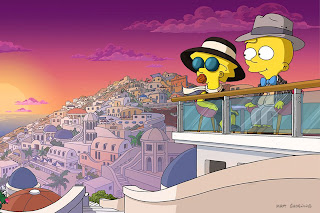 Is that time of year, Disney welcomes The Simpsons into the House of Mouse.
The company is taking a new step on releasing a short film in front of a Disney/Pixar feature film from 20th Century Fox (now called 20th Century Studios) since Disney oversaw the acquisition of Fox in March 2019. Fame animated-television director David Silverman (The Simpsons Movie) returns to The Simpsons world to helm this new, dialogue-free, beloved short film, Playdate with Destiny, featuring Maggie Simpson as the lead character with the new Simpson character coming on board.

After the acquisition of Fox in March 2019, almost a year later in late February 2020, Disney announced that a new Simpsons short will be in front of Pixar’s next original film Onward, featuring the stars of Tom Holland and Chris Pratt.

Here in the short film, Maggie befriends and becomes smitten with the new baby boy named Hudson at the children’s park. However, the main problem is when Maggie goes home, all she can do is emotionally think about Hudson and wishes to see him again at the park.

While the short is completely silent (compared to the Pixar shorts), the few things that are highly interesting to watch are the hardworking Hans Zimmer-style music produced by Bleeding Fingers Music with much nervousness and less-suspenseful on the tone and the beats per measure, and the strong focus on Maggie Simpson providing a unique, observable character development with a few laughs and tears along the way. Even though the storyline went through much lighter weight than an ordinary Simpsons’ episode, the short really adds a nice touching moment between Maggie and Hudson, giving a proper feel as if the audience is watching a romantic film for that Casablanca-matter for both kids and adults, especially on that nice, soft ending that satisfies both audiences and the the short’s overall performance under the presence from the director.

With that being said, Playdate with Destiny is a wonderful five-to-six minute short film like the previous Simpsons short The Longest Daycare, which was released in 2012 in front of Ice Age: Continental Drift. I love this short just as much as I love Disney and Pixar shorts. The director really did a bang-up job on this short that made it seem more interesting to watch with the Maggie character providing a comedic-yet-dramatic performance on every scene and every setting. Just let the audience know that this short is screened in front of Disney-Pixar’s Onward, so if you get a chance to see this film in theaters, you’ll also get to see Playdate with Destiny short as an appetizer and for more amusement before you get to watch the main feature film.