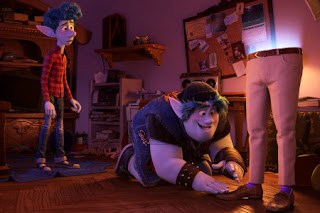 Let’s Go! Onward to Pixar’s Onward!
After a plethora of Pixar sequels, the studio is going to step away from crafting sequels for a while, but fear not, Pixar has a lot of good ideas to offer for this year and so on. Director Dan Scanlon, who helmed Monsters University, returns to his directing duties to craft the studio’s original film Onward, featuring the two Avengers co-stars Tom Holland and Chris Pratt as lead roles while actresses Julia Louis-Dreyfus and Octavia Spencer have received supporting roles in this feature.

Onward focuses on two elf brothers living in the fantastical world where mythical creatures hold magic before becoming civilized. The brothers Ian and Barley (both voiced by Tom Holland and Chris Pratt respectively) later set on a quest to spend a day with their father by using the remaining pieces of magic to bring back their dad fully before the time runs out.

The story is inspired by Scanlon's relationship with his father who died when Scanlon was a very young child. The relationship between a father and a son plays the key role of the film and serves as part of the film’s dynamics. Given the fact that it is supposed to be kids’ movie, Onward is actually a combination between Dungeons and Dragons games and the The Lord of the Rings trilogy that fits the genre for a fantasy film. The film captures the enduring power, notion, and a strong, deeper tone that writers Scanlon, Jason Headley, and Keith Bunin needed to put in order for the film to produce more emotional support for the film’s plot line, the characters, and the climax in this story. Even setting the astonishing remedy from the colorful CGI boosters. Not to mention with the laughs, there are some unexpected turn of events, physical buttcracks, and the unfair burdens for both elf brothers’ character. Not to mention the hardwork in those orchestral pieces coming from composers Mychael and Jeff Danna whom they previously worked on Pixar’s The Good Dinosaur, which became a box-office failure.

MCU actors Tom Holland and Chris Pratt really nailed it on their perspective roles as the elf brothers. Holland really provided much depth and earnestness on his Ian character while Pratt is dropping the ball on his Barley character with much energy and comedy to it. Other than that, these two actors know what to do as they have the palm of their hands since they both worked together before and having the time of their lives as buddies.

Julia Louis-Dreyfus, who voiced Princess Atta in Pixar’s second film A Bug’s Life, appears as the mother of the two elf brothers while Octavia Spencer appears as the owner of the TGI Friday’s-esque restaurant who helps the brothers on the way. Actors Mel Rodriguez, Lena Waithe, and Ali Wong also appeared as Officer Colt, a cyclop cop, and a satyr cop respectively.

While the film is enjoyable, the three things that are missing from this feature are lacking any other creatures (including gnomes) shown onscreen based from the trailer, the trash-eating unicorns getting less screen time, and lastly, there isn't much variety compared to the Dungeons and Dragons as Onward is actually (and considerably) a road-trip movie, rather than a board-game movie with magical elements burst out onscreen, like Robin Williams’ Jumanji for example.

With the magic being used and the purpose being fulfilled, Onward is a very good movie, recalling from Beauty and the Beast tagline “tale as old as time.” It takes much hardwork, effort, and dedication for the director and the writers to work on this beautiful piece of artwork. Holland and Pratt really fit the bill together. And that’s it, I can’t give too much away from the film. But I’ll admit, Onward may reach its level from other Pixar films, though I'm hoping that this film is going to be a huge success at the box office. But more than that, I have high hopes that the studio will be making more original films like this one. Speaking of that, we have another Pixar original film, Soul, coming up this year. As a die-hard Pixar fan, Onward is worth the watch for both adults and children. You will love it, trust me!