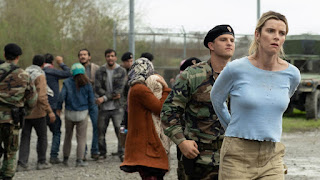 “The Hunt” goes on!
Usually, horror films and thriller films can be quite scary and much too tolerant for adult audiences. But for “The Hunt,” it’s actually a sports film with much suspense and satire added to it. The film is loosely based on the story "The Most Dangerous Game" by Richard Connell. Craig Zobel steps into the game as the director of the film while Jason Blum serves as the producer. The film features Betty Gilpin as the leading role while the cast of supporting actors consist of Hilary Swank, Ike Barinholtz, Ethan Suplee, Emma Roberts, Wayne Duvall, Justin Hartley, Glenn Howerton, Amy Madigan, and Reed Birney.

The film was scheduled to release in September 2019, but it was cancelled by Universal Pictures due to the mass shootings in El Paso, TX. It was then rescheduled for theatrical release in March 2020.

“The Hunt” focuses on a female hunted victim named Crystal, whose nickname is “Snowball,” becomes one of the twelve hunted people who have been kidnapped to serve as the prey for the rich-thrill-seeking hunters. Stranded and not knowing where she is, she puts her strength to the test by tracking down every hunter in many areas to find out who is responsible for creating an illegal hunting game and putting their lives in danger.

Here in the film, actress Betty Gilpin (Netflix’s GLOW) plays a meatier protagonist as Crystal/Snowball, who hunts and fights back the hunters who are obsessed with kidnapping the strangers and taking them to the hunting grounds where they are forced to become the hunters’ preys. Gilpin’s performance leaves a fun trail for the character's personalities and the hard work the director wanted the most throughout the film.

Hilary Swank portrays a hidden, main antagonist as Athena living in the rich, luxury manor who is responsible for kidnapping the strangers and making them become her and her henchmen’s hunting targets. Swank’s performance as Athena seems worthy to watch, expressing the character traits of a rich-vs-poor people conflict.

Though the film is a bit off when crafting a storytelling idea on “The Hunt,” it’s a fun, yet despicable movie to digest when coming into the theater to see the action, the drama, and the suspense flying all over the theater and to people’s minds. Not only that, but there’s a tongue-in-cheek twist to it when it involves life-or-death choices and much graphical violence being given towards the characters. The action sequences and the painstaking music from Nathan Barr gives a political resemblance from the “The Hunger Games” films due to themes and the trauma for rich-people-watching-poor-people-die entertainment, 2019’s Ready or Not, The Great Gatsby, and other films that involve hunting and shooting people and the characters’ force to choose either life or death, which are the main influences and the basic components for the film’s dynamics and the structure integrity for the plot line. Even more included in the film is being a social satire to politics and Donald Trump.

And what positive things about this film that is enjoyable are the comedy, which is somewhat humorous, Gilpin providing a strong character development, and the fight sequences at the end between Gilpin’s and Swank’s character. What’s more fascinating is that the film gives a theme and the tone of Pam Grier’s Blaxploitation films about revenge, dated back in the 1960s and 1970s.

“The Hunt” is an average 90-minute film. I didn’t like it a lot due to much violence and the exposures being splattered. Though, I would never say it's a bad film entirely, it’s just how much the director and producers overdid the film by adding too much stuff in there. It’s like putting too many eggs in the basket in order for the film to become a critical and commercial success, only to be backfired for the filmmakers and the studio. I wasn’t sure whether this film falls into the style of any great horror films like Jordan Peele’s films or the worst ones like Mark Hamill’s Child Play, which was released last year. It would be a difficult choice and a hard pass for moviegoers out there.