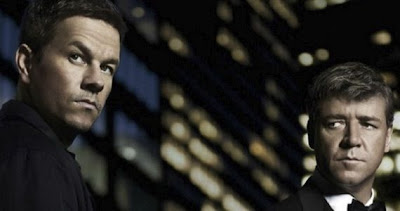 Mark Wahlberg has pretty much cornered the market on stoic good guys who have a strong belief in justice and revenge. In a debut solo directing effort by Alan Hughes of The Hughes Brothers who brought us Dead Presidents and American Pimp he is working from a script by Brian Tucker which had languished in development hell since 2008. The result tries to be a gritty American crime movie noir but probably should have left it on the shelf. The film is dark, moody, and at times unintelligible with Wahlberg's mumbling, Russell Crowe's accent, and plot points that are confusing. The film does look good, well paced, and just enough action to keep you awake. It's too bad none of the characters outside of one will make you care about them.

Wahlberg plays a New York City policeman Billy Taggart who had gone to trial for killing a murderer/rapist that was released on a technicality. The judge said the prosecution didn't make their case, especially since Mayor Hostetler (Russell Crowe) and police commissioner Carl Fairbanks (Jeffrey Wright) squashed witness evidence. To ease the angry citizens they do ask him to leave his job. Eight years later, Billy is working as a private detective taking pictures for divorce cases. He lives with his actress girlfriend Natalie (Natalie Martinez) who just happens to be the sister of the murdered girl from his trial. Katy (Alona Tal), Billy's office manager, tells Billy they are woefully in debt since he doesn't force his clients to pay him for his work. So when the Mayor calls to ask him to investigate his wife, he takes the job as easy money. The Mayor tells him that he doesn't want her indiscretions to get in the way of the current election campaign where his poll numbers currently favor his opponent Jack Valliant (Barry Pepper). What Billy finds is Cathleen Hostetler (Catherine Zeta-Jones) is meeting with Paul Andrews (Kyle Chandler) who is also Valliant's campaign manager. After the Mayor gets a hold of Billy's incriminating pictures and gives him the other half of the $50,000, Paul ends up mysteriously murdered. Feeling like he's been set up (duh), Billy bull doggedly tries to unearth the truth.

On top of the straight crime mystery, it's shrouded in layers of political maneuverings that involves a too good to true real estate deal that the mayor blatantly tries to pull the wool over the city's eyes. Like no one can see that he's trying to tear down a public housing project and turn it into a high rise development. Crowe in a really bad haircut and sketchy American accent talks all smooth and confident at every turn. He's the typical charmer that knows how to win his audience. During their debates Valliant meanwhile looking all earnest and liberal manages to hold his own clean up the mayor's office stance even after his manager is murdered. Fading into the background is Natalie who only serves to give a reason for Billy to make the sacrifice in the last act. It also doesn't help that most of the movie seems to be shot at night to intensify it's seriousness.

While Broken City isn't totally awful it's just broken. It does show some promise and fairly decent performances. Especially Jeffrey Wright and the zinger of a line that Zeta-Jones delivers to her husband at the end of the movie. It's a January release movie, like last year's Wahlberg film Contraband. You watch, are distracted for a bit, and go on on with your life.
(Review by reesa)