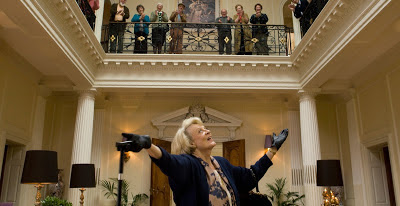 Beecham House is a retirement home for musicians. Based on the play of the same name by Ronald Harwood (The Pianist) who also wrote the screenplay. Dustin Hoffman directed and executive produced the comedy/drama filled with the best actors from Great Britain. Like the Best Exotic Marigold Hotel, the film redefines growing old with how art keeps the brain active, raises the human spirit and ultimately brings hope. Maggie Smith's performance earned a 2013 Golden Globes nomination for Best Actress in a Comedy or Musical.

The residents of Beecham House give a concert every year to celebrate Giuseppe Verdi's birthday and raise funds for their home. Life is thrown into turmoil when a former grande dame of the opera who has fallen on hard times comes to the House. Jean Horton (Maggie Smith) used to be married to Reggie (Tom Courtenay) and he's not very happy about the situation. Reggie, Jean, Wilf (Billy Connolly) and Cissy (Pauline Collins) were once in a quartet. With the fourth member of their group arrives, the old simmering rivalries begin to surface.

The beautiful appointed residence seems like an idyllic setting where the oldsters spend their days singing, reading, and the organized activities like dancing, or just having tea. Reggie gives classes to teenagers about opera. His best friend obsesses about sex, Cissy flutters around and may not be playing with a full deck all the time. Jean was more ambitious than her group members including her ex-husband. She's still a bit of a diva but refuses to sing.

Hoffman lets the actors and the story meander around the beautiful grounds of Hedsor House, Buckinghamshire in autumn 2011. There's lots of singing and musical instrumentals as the musicians practice for their concert. Michael Gambon plays Cedric dressed in a silk dressing gown and fez who is the master of ceremonies offering his critical advise to the performers. Dr. Lucy Cogan (Sheridan Smith) is in charge of the seniors at the home has to reassure the worried residents when one of their own is taken to hospital. You can see on everyone's faces the fear that one day that may be them.

Everyone tires to talk Jean into singing the Quartet from Rigoletto with her old group. It's a huge honor but Jean is adamant about not doing it. She doesn't want to insult the memory of who she was since she believes her gift deserted her. Cissy manages to push the right buttons that had threatens her pride. It's delightful to watch the seniors sing. It's encouraging to watch the actors of very mature years bicker, discuss points endless debates, then bring to their music something that long years of experience can enbue. The cast is filled with past members of real life opera companies. Age has not done that much damage to their voices. And the joy of their songs will leave you filled with hope that growing old doesn't have to be end of your dreams. Hoffman directed this his first movie at the ripe age of 75.
(Review by reesa)