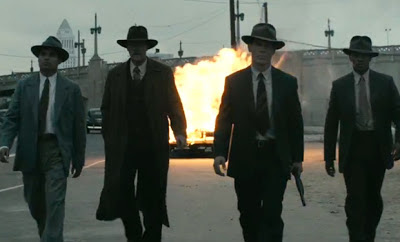 Journalist Paul Lieberman wrote a seven part series in the Los Angeles Times that was a result of 10 years of research about the LA war on crime during 1900 - 1951. He also became an executive producer for the film that was inspired by the thousands of pages of documents, grand jury transcripts, crime reports and interviews with the real police unit and associated criminals. Zombieland director Ruben Fleischer and Castle writer Will Beall bring some humor and action to the story of how the Gangster Squad took down Mickey Cohen who had been making a mockery of law and order in Los Angeles for 15 years.

It's Los Angeles in 1949 before J. Edgar Hoover's FBI acknowledged the existence of the Mafia. Not Italian and Jewish, Mickey Cohen (Sean Penn) wants to send a message to the bad guys in Chicago that LA belongs to him by horrifically getting rid of one of their soldiers underneath the famous Hollywood sign. Mickey, a former boxer, is sadistic, evil, and power mad. All he needs is a moustache to twirl. Chief Parker (Nick Nolte) asks righteous squared jawed Sgt. John O'Mara (Josh Brolin) to head up a team to secretly take down Cohen. They would be flying under the radar. No one will know of his team's existence except for him because most of the police force were under Cohen's influence so there's no one you can trust. O'Mara's pregnant wife Connie (Mirelle Enos) is already upset that he often comes home beat up from his altercations with the gang. In her heart she realizes that her husband is a big moral guy so she helps him select the members of his group. Officer Coleman Harris (Anthony Mackie) who chases after drug dealers, Max Kennard (Robert Patrick) an old school sharp shooter and his protégé Navidad Ramierez (Michael Peña), the “brain” Conway Keeler (Giovanni Ribisi) who worked in intelligence during the war is enlisted to be their wire man. O'Mara's cynical womanizing friend Sgt. Jerry Wooters (Ryan Gosling) rounds out the group. Wooters also falls into a relationship with Micky Cohen's culture adviser Grace Faraday (Emma Stone) knowing he's playing with fire. If Micky finds out, he would kill both of them.

The best way of taking down Cohen's hold on the city is to disrupt his main sources of income which are women, drugs and gambling. Everyone believes the attacks are Cohen's New York and Chicago competitors. He's trying to establish an major bookie operation that would connect across the US via phone lines. Obviously an idea that advanced today to online betting which makes his progressive views almost visionary albeit in a criminal sort of way. The Squad's main target is Cohen's El Dorado. The dream of his future empire. Enter the Gangster Squad who shoot it up with a trunk full of weapons to battle the gangster's machine guns and grenades in an homage to every gangster movie ever made with it's slow mo bullets and mayhem. It's a wise move of the producers after the incident in Colorado last year to remove the movie theater shoot out that was featured in the trailer.

The cars and sets were beautifully realized in this picturesque postcard vision of early Los Angeles. The costumes and make up were perfectly appointed. The squad represents with it's racial mix and blend of old and young characters. If this was a television series the various eliminations of Cohen's holdings would work well with the movie's episodic pacing. Everyone is either a good guy or a bad guy. There's no angst involved except for two timing Grace who only stays with Micky for survival. This is a comic book version of life in vintage LA. If you want some grittier drama check out LA Confidential. Otherwise it's a swell way of starting January.
(Review by reesa)