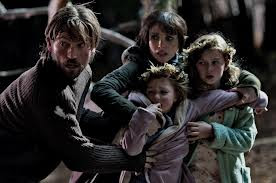 As I’ve grown older, horror movies have scared me less and less. Whether I’ve become desensitized or I’m too good at predicting or the movies are just poorly made, I don’t get scared in many movies nowadays. With that being said, I didn’t expect much from Mama. I expected an intricate and well thought out story because of Guillermo Del Toro. But I never expected to actually experience fear. With exceptional performances and well-planned jump scene sequences, Mama is a thrilling film that didn’t quite exceed expectations, but definitely held up to them.

One of the best things about this movie was the performance given by Megan Charpentier and Isabelle Nelisse. They both portray two girls who have lived in a cabin for 5 years since a young age all alone (or so people think). When they are found their uncle and his girlfriend take them in. The spiritual force known as Mama then proceeds to do her worst in an effort to gain the kids back from this couple. It seems as though child actors are becoming more and more believable onscreen. That was definitely the case with Charpentier and Nelisse. It’s enough to ask for a child to deliver a line without sounding fake, but what these two girls were capable of bringing to this film is purely amazing. They both portrayed emotionally scarred and estranged girls and made it believable. Even down to the small quirks that one would gain if you had had no acceptable upbringing. With those two girls holding their own, it was interesting to see Jessica Chastain in back to back weeks (Zero Dark Thirty and Mama) portraying two completely opposite roles. In this movie she plays a rock and roll, couldn’t-care-less, no-responsibilities type girl. She did well. It wasn’t Oscar caliber, but it was believable. So the casting was great in this movie, but one thing I had a problem with was the lighting.

Poor lighting is a rookie mistake. But Guillermo Del Toro is no rookie. Even though he was only executive producer on this movie, it still has his name being used as publicity. So many of the scenes were dark and shady it was hard to tell exactly what was going on. Maybe there is an artistic aspect that was being attempted, but if there was it completely went over my head. It was almost distracting how bad the lighting was set up. It may have added to the jump scenes, which in my opinion, were very well done.

Jump scenes are a tricky thing to pull off. Especially nowadays when it seems that every trick has been pulled out of the hat. And while Mama is heavy-laden with them and some of them can easily be foreseen, there are many times that it just comes out of no where and makes you leap out of your chair. Even when you’re not jumping, the scene is creepy enough to make you cringe. I’ve already stated that I never get scared in movies anymore, but this film was flat out CREEPY. Visually and mentally. I haven’t seen a movie that did this to me since Insidious (which in my opinion is one of the freakiest movies out there). So Mama definitely delivered on scares.

All in all, Mama is worth the eight dollars and one and a half hours to see. Especially if you’re a horror fan and like being scared, If you’re not, well then why are you even reading this review? The scares and performances are enough to go see this movie, and if you throw in the story to go with it, you’ve got yourself a pretty good time at the movies. Now I’m not saying this film is going to earn any awards or be remembered for years to come, (it might, I’m just not saying that). But what I am saying is that out of all the crap that will come to theaters this year this one stands above it and is worth seeing. My rating is 7/10.
(Review by Weston Baker)