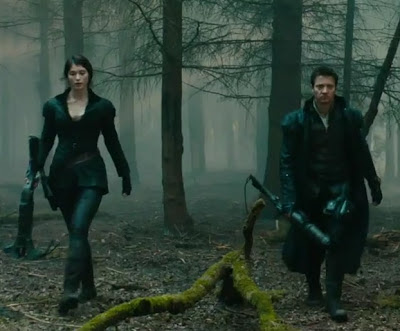 It's MTV Films. That fact and the title of the movie informs the average movie goer that they can expect leather, guns, witches, and hard core action/violence that earns an “R” rating. Directed by zombie comedy Dead Snow, Tommy Wirkola wrote with DW. Harper a rebooted Brother Grimm child's tale of young kids in the woods, candy house, putting the witch in the oven. That's pretty much the first five minutes. What they expand upon is what happened to those kids when they got older. The audience that MTV is aiming for is the young crowd that live and breath video games. It's only natural the sibling would become kick@ss witch hunters.

Jeremy Renner and Gemma Arterton play the now older brother and sister tag team for ridding the land of nasty looking witches. The witches look and act horribly so that when they get their due from H&G it will feel righteous. They have built a reputation for themselves and are hired by a small town mayor to investigate the missing children. Sheriff Berringer (Peter Stormare) is trying to rile the townspeople up to burn Mina (Pihla Vitala) as a witch until Hansel stops him. They don't make a good impression on the lawman. They discover is the upcoming Blood Moon, a once in a generation occurrence that is celebrated as the evil witch Sabbath. All the evil witches will be gathered for a special potion that will make them invincible.

Famke Janseen is the pretty face of the grand witch. She's powerful and disguises her true self through a glamour spell. She needs 12 children to accomplish her ritual that will make witch impervious to their most dangerous element (to witches at least)...fire. Hansel & Gretel must figure out a way of rescuing the lost children and paid. There's a lot of stuff going on while this is happening. For all their experiences of hunting down witches, they daring duo often get beat up in the process.

The historical atmosphere is quickly dissipated with the steam punk style of the characters, the diversity of accents and modern day swear words. They even have a crank style electric zapper putting down witches and jump starting a heart. Renner and Arterton make an honest go trying to instill some serious threat with their attitudes. Arterton's Gretel is a no nonsense heroine who gives a punch as good as she takes. Renner is an extension of Bourne and Avengers. He only gets some crisis moments with the truth of his family's desertion when they they were left in the woods, and revenge motivation in the last act.

For the mindless number of kids who will go to this because it's in 3D and because it's on the IMAX screen. This movie is totally aimed to empty their pockets and check their brains at the door. It's loud, bloody, busy and there's a troll named Edward. What else do you need to know?
(Review by reesa)

Posted by Dallas Movie Screenings at 2:01 AM