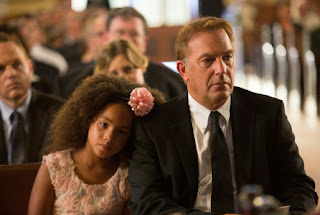 The race issue is viewed from another side by writer/director Mike Binder (The Upside of Anger, The Sex Monster) with a story involving a white grandfather and custody of his bi-racial granddaughter. The film premiered at the 2014 Toronto Film Festival stars Kevin Costner who also produced the movie. Supposedly the story is based on true events it doesn't really tackle any thing substantial except annoyance that the whole premise is whether a young girl is better off with the white or black sides of her family. Can't she have both?

Costner plays Elliott, a lawyer, just lost his beloved wife in a car accident. He has to break the news to his granddaughter Eloise (Jillian Estell) with whom she lives as her mother died in childbirth. The only family she has lived with is grandmother and “papa”. Her father Reggie (André Holland) is a crackhead, thief, and has not been the child's life. His mother Rowena Jeffers (Octavia Spencer) also known as WeeWee is concerned that Eloise should live with her family in South Central. She believes that her granddaughter should be exposed to her “people”. She is also concerned because Elliott seems to be having a drinking problem.

It is frustrating as an audience member watching Elliott drink and attempt to take care of a little girl. So to show that Elliott is really not weird or unsavory, he hires a tutor from CraigsList. Duvan (Mpho Koaho) steals the show from the rest of the great cast. He plays an African civil war survivor who has studied well, writes papers on his work, self taught in 9 languages and he becomes Eloise and Elliott's tudor in middle school math, but also Elliott's driver when he's too sloshed to be behind a wheel.

Rowena decides to sue Elliott for full custody or even shared custody of Eloise. She hires her lawyer brother to help her. The uppity Ivy-Leaguer lays out his strategy with the “race card”. The paint by numbers stereo types is played in full day glo colors. Elliott is the typical white, paunchy rich guy who is used to getting his way. Rowena is the loud, over emotional, self rightous, self made black woman who supports multiple extended family while running a few businesses from her garage. She gives that all knowing “look” while rolling her eyes. Octavia Butler is basically used as comedic fodder especially when trading eyes with the judge.

The movie rolls along fine establishing characters and there are some funny moments that will have you chuckle out loud. But the last act of the film is somewhat expected, and Costner needs to make his obligatory speech about it's not about race...blah blah blah. We know already. It's not about black or white, it's sort of just grey.
(Review by reesa)

Email ThisBlogThis!Share to TwitterShare to FacebookShare to Pinterest
Labels: Black or White review