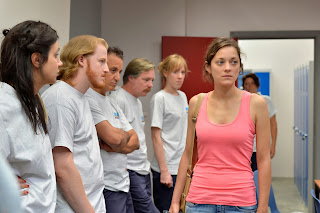 This is a simple, stripped-down story that packs an emotional punch and really questions our morals as humans. Marion Cotillard stars as a mother who has lost her job. She finds out that her co-workers took a pay bonus in exchange for her dismissal. Convincing her boss to let her keep her job, she goes to every one of the co-workers and persuades them to change their minds and let her stay with the company instead of them getting a bonus over the weekend. What I just told you is exactly what the film is; encounters of her and her co-workers explaining to them why she needs to keep the job. I won’t spoil on how it ends. Short, sweet and to the point, right? Yes, but there is some real, authentic human emotions we don’t see in film that often. The direction in this film is bare-bones storytelling, but very effective on how relatable this situation is to real life. If you look deep into it, the directors try and show us how we have crappy morals sometimes. Picking money over having a human being keep her job so she can support her family? It’s pretty heavy stuff, especially since Cotillard’s character has problems at home and within herself, too. On a moral standpoint, why would we take the money? Many on the co-workers in the film have families as well and have to support them. It’s a lose-lose situation, you will feel guilty no matter what. And that’s what the director’s display so well in this film. Unless you don’t care and take the money, then you might just not care about the main character. You laugh, but I know people like that. Marion Cotillard, recently, got an Oscar nomination for her work in this film and she deserves it. She carries this film and brings an intensity and rawness to her character and, easily, makes this one of most relatable characters she has played. She is simply, like the story, outstanding. The cinematography is nice and really sinks into the human emotion as it will stay on certain shots for 5-10 minutes straight. For this story, you don’t need ridiculous camera positions and fast cuts as you should let the story and dialogue carry it. As far as the editing goes, I said it stays on shots for a long period of time and it works. It never dragged and it had a nice slow-burning rhythm. For people who don’t like a slow-burn might find this boring. It’s a compelling human drama that questions our morality and how far someone will go just to keep a measly job; and maybe sometimes there is more to life than just a job. This was a nice surprise and I am glad Marion Cotillard got a nomination for this role. I highly recommend it. 9/10
(Review by Chase Lee)