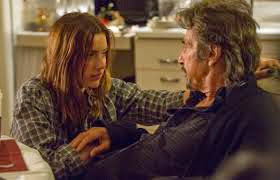 First impression of The Humbling that most people will refer to is Birdman. The story from a 2009 novel by Philip Roth with a screenplay by Buck Henry about an actor experiencing professional angst is similar to Michael Keaton's tearing up the screen battling his personal demons. Director Barry Levinson centers the camera on Al Pacino's craggy face while he recites his lines for a contemporary Shakespeare play while doing his own makeup. The actor who knows really nothing of the world outside his artificial creations must now deal with the real world when his talent begins to wane.

Al Pacino is known for eating up the screen in no matter what part he plays. His deliberate delivery of speech often borders on overkill. He plays the famous stage and film star Simon Axler who suddenly discovers that the passion of his talent is suddenly lost to him. He can't remember his lines, and he's mixing lines from other parts into what he's doing. He can't seem to separate his dreams from reality to the point where he takes a dive off the stage during a performance. When taken to the hospital he cries in pain getting the sympathetic nurse to help, and he's analyzing his performance asking if she actually believed him. After trying to do a Hemingway, after all that is why he has a shotgun to begin with, he institutionalizes himself for awhile. The stay helped a bit, but while there he meets this wacky young woman Sybil (Nina Arlanda) who wants him to kill her husband because he did a movie where he killed someone and he was good in it.

He goes back to his big beautiful home of 14 years, where he only lives on the bottom floor. His acting jobs have dried up and his agent (Charles Grodin) can only find him work doing hair loss commercials overseas. Axler Skypes his therapy sessions with his shrink (Dylan Baker). His god daughter Pegeen (Greta Gerwig) shows up at his doorstep and confesses she's loved him since she was 8 years old. She initiates a sexual relationship with him even though she tells him she's a lesbian. Pegeen's lover (Kyra Sedgwick) at Westcott College where she's a professor in theater arts begins to make cryptic calls to Axler. Plus Pegeen's ex lover who became a transgender Priscilla to Prince is hoping to get back together now that Pegeen is doing heterosex. Adding to the mix is Sybil who keeps stalking Axler to kill her husband. Pegeen's parents find out about their affair and as Axler's best friends (Dan Hedaya and Dianne Wiest) from the past they are aghast demanding him to stop seeing her.

Axler who had no real friends and family and has always been alone, basically just watches as the characters around him collide. He finds himself watching everyone and critiquing their performances. Pacino dominates the screen even when he's being passive. There are some very funny moments in the movie, but the film is very over the top. The cast is wonderful, especially Dianne Wiest). The film sort of falls apart at the end, but getting there is pretty interesting.
(Review by reesa)

Email ThisBlogThis!Share to TwitterShare to FacebookShare to Pinterest
Labels: The Humbling review