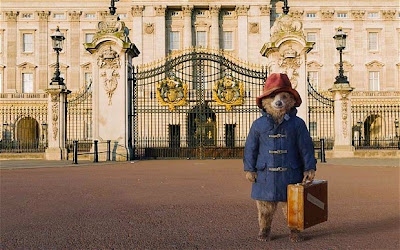 Paddington Bear is a fictional childrens favorite since 1958 written by Michael Bond and first illustrated by Peggy Fortnum. Paddington books have continued over the years, had a BBC television series, a Hanna-Barbera TV series, a Royal Mail 1rst class stamp and even balloon at Macy's Thanksgiving Day Parade. He's as loveable and recognizable as Pooh Bear, but for older children. This new movie directed by Paul King who also wrote the script with Hamish McColl features the origins of Paddington and how he comes to London. It utilizes live action actors and computed generated imagery and animatronics. It's a visual treat and family friendly that will delight kids as well as their parents.

Bears were discovered in the deep jungles of darkest Peru by an explorer Montgomery Clyde when he meets a family of semi intelligent bears who can learn English. The bears, Lucy and Pastuzo live with their nephew in a tree house with all the English furniture and accessories left my Clyde including his hat. When an earthquake destroys their habitat and kills the uncle, Lucy sends her nephew to London to make good on Clyde's welcome to come stay with him. Wearing Clyde's old hat, he manages to stowaway on a ship and wait at the train station for someone to help him. The Brown family comes by and the mother Mary (Sally Hawkins) offers the lonely bear respite from the cold despite the misgivings of her husband Henry (Hugh Bonneville) and the teenage daughter Judy (Madeleine Harris). Their son Jonathan (Samuel Joslin) is more welcoming as well as Mrs. Bird (Julie Walters) their housekeeper. They decide to name him Paddington (voiced by Ben Whishaw) after the station at which they found him. After a series of misfortunes that Paddington causes in the Brown household, they decide to help him find the owner of his hat. Meanwhile the Brown's noisy neighbor Reginald Curry (Peter Capaldi) is lured by Millicent Clyde (Nichole Kidman) who is a taxidermist at the Natural History Museum to capture Paddington. She became aware of Paddington and wants him for her collection.

There may be some dark moments in the film that may be somewhat scary for the little ones, but they are balanced by the mischievous and loving moments with Paddington and the Brown family. The family over comes their misgivings of having a troublesome bear in their midst by the innocent and good-hearted Paddington. He's always unfailingly polite and loves marmalade. Plushies sales of Paddington Bears are pretty much a guarantee.
(Review by reesa)