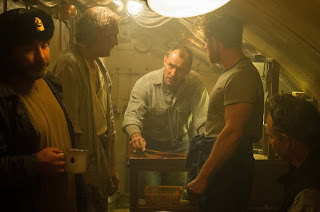 Any film having to do with submarines immediately fills one with claustrophobic dread. Directed by Kevin Macdonald (The Eagle, The Last King of Scotland) and written by Dennis Kelly takes a ten little Indians/Moby Dick plot within the cramped dark environment with English and Russian misfits who have nothing to lose. It's a tense with black comedic undertones. It's like the worse case scenario and everything bad that can happen...will happen. It's edge of your seat kind of stuff.

Jude Law plays Captain Robinson who just got laid off from his job as a submariner with a salvage company. He was with them for 11 years and working with subs for over 30 years. It's the only thing he knows. It ruined his family life and he can only watch his son and ex wife from afar. A friend tells him that he heard of a way to make some ridiculous money. There's a rich guy who will fund this adventure of retrieving some Nazi gold that was being transported by a Uboat during WWII. In order to get it, they will need a submarine and divers. They manage to get a really old rusted Russian submarine. With a basic crew of 9 men, half English and half Russian (since they will be near Russian seas, they need Russians on board just in case) they fix the basics and set out with the company lackey Daniel (Scoot McNairy). Daniel is sort of like the smarmy Burke in Aliens. He's totally unfit for the job at hand and easily panicked.

When Robinson tells the crew the mission and how much they aim to make in the haul, it brings out the worst in some of the crew members. Fraser (Ben Mendelsohn) the master diver, thinks the Russians will get greedy, so it's best to get them before they you. The Russians think the young kid Tobin (Bobby Schofield) is a bad luck virgin. The oldest is a broken down geezer with emphysema (David Threlfall). The crew members glower and sneer at each other and fanning the flames of their paranoia is Daniel and Fraser. Robinson manages to keep a tight cap on everyone's boiling over hysteria. The hierarchy of a ship's crew which is so firmly embedded in their need to survive corrals most of the arguments even by a hair.

But bad stuff happens, truths are revealed and crew members end horribly. Plus they are sitting at the bottom of the sea and taking on water. It's a gloomy and grimy but probably one of the best films to come out in January. So this is one to watch.
(Review by reesa)