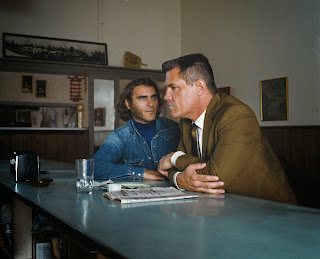 Director Paul Thomas Anderson has a long list of quirky intense movies like The Master, There Will Be Blood, Punch Drunk Love, Magnolia and Boogie Nights. Adapting the equally quirky wordy novel by Thomas Pynchon, Inherent Vice which is so filled with off beat humor that it may be a hard sell to the general movie going audience looking for shoot outs and car chases. It however may become the next cult classic. If you give this film a chance, there are some laugh out loud moments of absurdity, sometimes scenes drag too slowly, and characters come and go, but you will be rewarded eventually.

Joaquin Phoenix plays Larry “Doc” Sportello a hippie PI who lives in the fictional town of Gordita Beach during the 1970's. His old girlfriend Shasta Fay Hepworth (Katherine Waterston) asks him for some help to find her current boyfriend, real estate mogul Michael Z. Wolfmann (Eric Roberts). During his investigation he meets with various characters who also ask for his investigative services that coincidentally seem to be related to Woflmann. Lt. Det. Christian F. “Bigfoot” Bjornsen (Josh Brolin) has a flat top crew cut and a hatred for hippies sets up Doc for a murder of Wolfman's Aryan bodyguard. Doc's maritime lawyer Sauncho Smilax, Esq. (Benicio del Toro) manages to get him released as Bigfoot is only using him to get more information. Along the way he meets up with Hope Harligen (Jena Malone) who is looking for her husband Coy (Owen Wilson) who has been declared dead, but she thinks otherwise. Un-expectantly Doc meets up with Coy who wants him to check up on his wife and child. He is also connected to Wolfmann and the Golden Fang, a schooner that Doc is told to beware.

Cryptic clues leads Doc to a office building of the Golden Fang and Dr. Rudy Blatnoyd (Martin Short) who snorts coke and has sex with his receptionist and patients. He says the Golden Fang is a dentist consortium. Doc tries to get information from his girlfriend Penny (Reese Witherspoon) who is a Deputy D.A. in exchange for the whereabouts of Wolfmann and some shady F.B.I. involvement. Somewhere along the way, kilos of heroin show up. It's a complicated and often confusing plot. Scenes are short and filled with familiar faces like Jenna Newsom, Jeannie Berlin, Serena Scott Thomas, Maya Rudolph and Martin Donovan.

It's a movie for stoners. Doc who is constantly smoking, which probably keeps him from freaking out and losing it if he were straight. His low key and contemplative attitude is tempered by his wanton lust for the women around him and his focus on the investigative task at hand. Set dressings and costumes are so meticulously detailed adds to the visual appeal of the film. As well as the dialogue that punches and swerves. This movie is not for everyone, but if you have the patience and a smoke, then enjoy.
(Review by reesa)