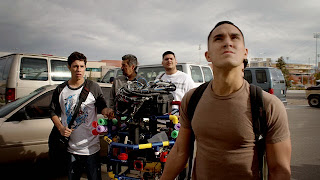 I walked into the theater expecting an exciting story about high school teenagers working together to complete an awesome project. I instead found myself never getting into the film and the exciting part I was expecting wasn’t there. I do respect though that the film really did try to show the problems of Immigration Enforcement with the boys and how their lives were altered every day. I thought that “Spare Parts” didn’t have natural acting from the lead Carlos PenaVega and that everything was in an ordered fashion. I never had a scene where a character touched me or got me uplifted for this robot that the boys were making. The different obstacles each boy went through were represented well. For instance, one of them has a father who does not understand him and always wants him to protect his mischievous little brother. Another teenager, Oscar, is trying to serve for the US and does not have his birth certificate because he illegally immigrated. With George Lopez’s role of the coach, I thought that he strongly conveyed his passion for the kids and his caring for each one of them. His character at one point in the film gives the guys over $100 to complete their budget for parts. Marisa Tomei plays a teacher that looks out for bad behavior but also has a special connection with her students. She is very encouraging to Oscar and wants him to find his path of success.

The film was set in Phoenix around a school that had a lot of undocumented persons and not too much funding. Even though this wasn’t a fantastic film for me I could still feel the school atmosphere and the heat of Immigration Enforcement following the characters. I do appreciate that it showed that not everybody has a normal life. Some teenagers deal with a lot more than a phone being taken away. The making of the robot that would have to go underwater showed the intricate way that the boys had to involve items to make their project a reality. The fact that this is a true story is very re-assuring that people from any background can work hard to make a better situation happen. Yes this film could have been made with more feeling but I thought it wasn’t a big waste of time to see it. I think that “Spare Parts” could create hope for people but that it still was a bit monotone.
(Review by Wyatt Head)