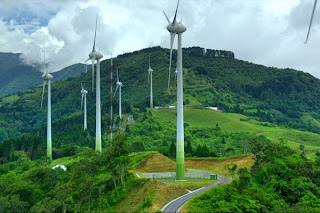 America became an industrialized nation several decades ago. The energy used in everyday business is explored in “Energize Our World”. The film brings to reality the fact that natural resources are being used with no conscious effort for renewability. It explores the people and companies who are actually trying to respect this environment and realize the finite stature of our planet. Several very interesting processes were shown including the cleaning of water and use of it to stimulate electricity. There was another company in Malaga, Spain which provided meters in houses so the owners could track electricity usage. This company also utilized the electric car model which took energy from the grid but gave back energy too. Electricity to stimulate cars is portrayed as significantly less costly than gasoline or diesel. Another company used carbon dioxide, a waste product, to dye clothing with surprisingly no chemicals. There is an architect in the film who designed a building thinking about how resources can be used to maximum capacity. Even the US, which is said to be elementary in recycling, has a company in Georgia making drinks with reusable bottles. The director, Susan Sember, employed the use of serene looks of nature and cities to make this piece appealing the eye. Cities with the coast bordering them like Malaga in Spain looked beautiful with the buildings tall against the water. I thoroughly enjoyed watching “Energize Our World” and I personally have an issue with waste on this planet.

The film brought much needed attention to young people especially about how to become better stewards of our home. I think what was most important that was expressed was how environmental problems will be our issue very soon. The narrator had an older and solid voice that engaged me into focusing to what was being said. People who were interviewed seem to have a passion for recycling and modernizing our energy usage procedures. The fact that multiple companies are trying to create their better nation is incredible to me. We need documentaries like this to show real fact and maybe fiction can be set aside for a while. The use of renewable energy is highly advocated by this project and I think that is the only way to go. The director’s use of going all around the world to discover companies was incredibly productive. This is the type of project that needs to spread into schools, universities, and many families homes.
(Review by Wyatt Head)

Question 1) (To Executive Producer Joni Bounds) What is your background?

A: I have a background in the music industry. I graduated from TCU. I moved to New York and became a music promoter doing events and fundraising. Then I went into education. I had two sons. I came across a 1984 story and got into film-making. I wrote a story for a feature film. It was very hard to find funds for a wanting to be $10 million film. I then thought that a documentary about social issues would be interesting. I arrived at a documentary idea with filmmaker Susan Sember.

(In regards to the film)
We started filming in Costa Rica. We wanted to focus on specific topics. The initial title was “Energy to Endure”. The then film was shown at the United Nations. Susan liked great technology like the 4K high-definition. Some of the film footage can actually be 3-D. We ended up with an interview with Bruno Stagno who is in the film. He opened the door for us. We contacted several corporations. Geert Woerlee, although hard to get, liked the story and did an interview with us as well. Passion really comes from the people we interviewed. The interviews just grew and grew. We went to Sage. The people there were trying to reach out to young people to take better care of our planet. We wanted to reach a bigger audience than just a normal documentary. Everyone we met was truthful about what they were doing. A person was interviewed who gets sludge from the refineries and turns it into bio-diesel fuel. The topic of the film could go on and on. I am inspired as a filmmaker. I would like everybody to get in on this issue.

A: They have a sustainable energy area. All wild life is free there. Costa Rica embraces the simple things of life. They had banana plantations. The farmers used sun, wind, and their own irrigation. Costa Rica uses the basics. There has been years of prior unsustainability but it has changed over the years.

A: “Sun In the Night Sky” is the name. It is based on a true story. I knew the person who told me the story. The film explains the socio-economic differences between plantation workers and owners. The story involves a love story and has a silver lining.

4) How did the narrator Edward James Olmos come into the film?

A: We caught him while he was filming another project. He became interested after looking into what we were doing. It was one thing after the other which became a very fast process.

3) What did you mean that by getting the Netherlands involved you could get everybody?

A: I reached out to Geert Woerlee over there and he thought about it. He’s such a famous guy in the industry, it just happened. He could be a mentor.

4) What are the other festivals you’ve been in?

A: We went into the Santa Barbara film festival. The director of the festival introduced the film. We didn’t realize who our competitors were in the category. We were blown away by our competitors. We don’t think we will be in DIFF because we’re five minutes too short. We want to show it to young people. The Thin-line film festival producer got us sponsors for our events there. Our next place is Palm Beach International film festival. We also want to reach out to the Hispanic community because half of the film is in Spanish speaking places. We want young Hispanics to see it as well.

5) How did you get the daughter of your interviewee, Jim Scott, involved?

A: We reached out to them because they have a thoroughly recyclable drink bottle. It was a spontaneous interview of Natalie (the daughter). She is an SMU student which was awesome. She was refreshing. She’s aware of the people at SMU. Natalie said fellow SMU-ians are not having the best habits. Whatever minor things one can do to take care of the earth is good.

6) Have you heard of Earth Day in Dallas?

A: I know the people who head it up. I want to work with them.

7) What has been challenging in producing the film?

A: Funding was hard. We’re getting sponsors for festivals and more attention from distributors. Having to become more flexible was hard too. It will work out if it’s supposed to.

8) You wanted to be separated from politics?

A: We had conflicts in belief even in the film. Politics would be another film.