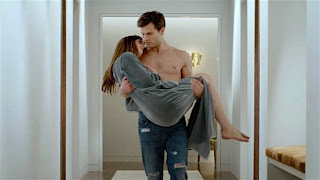 Start with a poor literary effort, sourced from Twilight, turns it into a poorly written script about a rather controversial subject/relationship and what do you get? A potential, albeit controversial, hit that draws in its millions of fans, the curious and the questioning while building a massive wall between them and the uneducated, uninformed, conservative, religious right, running away in horror with arms waving in the air. If you read the book, the film will seem very familiar as it follows the sophomoric prose quite closely. Seattle and the Pacific Northwest provides the scenic backdrop to the budding romance between billionaire young-cutie-with-a-secret, Christian Grey and naive ingénue college gal. Anastasia Steele.

First off, Dakota Johnson, offspring of Hollywood parents Melanie Griffith and Don Johnson truly holds her own, portraying Ana as a bright, fresh-faced young innocent, clearly out of her "white bread" league when she meets CG for an interview for her college paper. After the initial meeting and while the relationship progresses, she is way too calm for someone being courted by a world famous billionaire, who seems to be able to go anywhere in the world without being recognized as the famous public figure he is. Most girls would be speechless and quite over the moon at all that high-class attention. Ana shows a presence of mind that belies her sheltered background. She speaks volumes through her eyes, facial expressions and body language and is quite engaging and charming. Dakota has done well.

For a variety of reasons, the FS of G books were runaway bestsellers, so a film naturally had to follow them and yes, have created quite a stir, as most debate worthy subjects will do. It stands to reason if the subject offends, vote with your nonattendance and just don't go. This subject has been examined in art house films before and has on occasion been wrapped up in pretty paper for the mainstream. 50 plays like a hard R and it is amazing it wasn't slapped with NC-17. That said, no one under 18 should go and if you are 18-22, you’d better be mature and open. A Valentine's weekend release is somewhat disconcerting but that is big film. This is business and this money making machine was going to be harnessed.

What you think about this film will depend on how you were raised, socialized, cultural zed and allowed to explore a wide range of subjects and ideas with an open mind. Just guessing here, but I am feeling that most peoples' minds have already been made up about this one, before taking one step towards the theater.

Fans of the book should be fairly satisfied with all except possibly the portrayal of Mr. G. He will not be everyone’s’ ideal. This film will never be a masterpiece or culturally relevant, but it wasn't intended to be. While the score could have been one of the movie's best features, they chose to go the "pop" music in the background route, with scene relevant lyrics, as opposed to the heavily classical, emotive score that the author preferred. This was a BIG mistake. But the score keeps with the more lighthearted banter we see playing out on screen. Makes it all less sinister. The director has chosen to really lighten the overall mood of the picture, through some campy humor and more playful exchanges between the actors, who yes, sorry to say, do lack some badly needed chemistry. We should worry about the future of Darker and Freed with these two actors, who reportedly loathe each other off screen, if you believe the hype. As a result, CG does not come across as a real monster. The key scenes are not as horrific as they could be (no blood or scars), and Ana is really way more intelligent than the public gives her credit for. She is more mature than she initially lets on, fully capable of informed consent, calling some of her own shots, and shaping the ‘sub’ contract into one she can live with. The BDM aspects are played fairly low kept and rather safe compared with the world's actually reality. 50 is an "eye of the beholder" film. Take is seriously or not. Critics are not going to find much love for it but the fans of the books will vote for this one. Stripped down, this is the basic premise of the series for so many films, just dressed in leather. CG is wounded, troubled, confused man-child with a great high rise apartment, cool cars and a killer wardrobe, eventually being saved from his twisted past by a pretty, younger but wiser female who will show him what really love should be about. (Eventually on down the road in the future). Granted if you strip all that away and make him poor? This story changes completely. Hold tight. The ending to this one will leave you hanging!
(Review by Cheryl Wurtz)