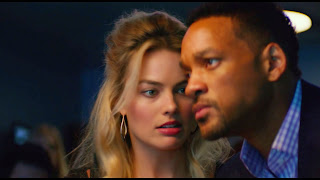 Will Smith is generally box office magic, but lost some popularity cred with After Earth. Now he's got his swagger back better than ever in a slick contemporary movie about a con man and his beautiful intern. Directed and written by Glenn Ficarra and John Requa (both did I Love You Phillip Morris and Bad Santa) moves the scenes with bright colors and exotic locations. It also gives Smith a chance to play a more romantic character which he gives a bit of angst and sexual wow-ness. For a February movie it is better than expected.

Smith plays Nicky who uses his con skills to get a seat in an exclusive restaurant. He catches the eye of the beautiful Jess (Margot Robbie) who seduces him to go to her room. Unfortunately for her, he recognizes her game and calls her on it. She is a already a competent pick pocket herself and follows him until he agrees to teach her some skills of the trade. He agrees to take her on and they hit the Superbowl in New Orleans where he has a team of 30 pick pockets working together to lift whatever they can in the crowded streets. They gain a million dollar haul of items which is carried by Nicky to be divided after everyone returns to their homes. On the way out of town, they go to the big game in an exclusive sky box, where Nicky proceeds to make outrageous bets with an Asian millionaire. Jess gets freaked out when Nicky starts to take their haul as collateral. Afterwards, Nicky gives Jess her cut and says goodbye which breaks her heart since they have been getting it on.

Three years later, Nicky is running another con in Buenos Aires with a billionaire international race car owner,Garriga (Rodrigo Santoro). He finds Jess is there and all over Garriga. She tells him that she is with Garriga now and he should leave. The story begins to get complicated at this point because Nicky still has a huge con to accomplish. His first big job since Jess left him. Garriga's head of security Owens (Gerald McRaney) suspects the relationship between Nicky and Jess.

Can't really explain much else without giving stuff away. Suffice to say that Smith looks healthy and pumped probably to have a believable romance with a woman 20 years younger. Margot who stole The Wolf of Wall Street, is stunningly gorgeous and it's easy to understand why Nicky would get distracted in his “focus” and his cool is challenged by feelings of jealousy. It's a fun romp, that is easy on the eyes and a good wintertime distraction. However you may be a little more careful with your wristwatch and wallet when walking through crowds.
(Review by Reesa)