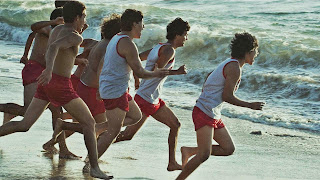 Nothing beats and inspirational movie based on a true story. In the hands of Walt Disney Pictures, it's a slam dunk when it comes to making sure there's not a dry eye in the house. Who knew about the small town of McFarland, just north of Bakersfield and south of Fresno, ever had 24 California state championships in cross country from 1987 – 2013. Directed by Niki Caro (Whale Rider, North Country) with a script by Christopher Cleveland, Bettina Gilois and Grant Thompson, the story begins in 1987. As expected there are some social issues and racial prejudices that are prevalent to the times that are still important now. But it doesn't hit you over the head with it's discussion. The movie keeps it's heart.

Kevin Costner plays James White, a high school teacher/coach who can't seem to keep his anger in check. He's come to the end of his career with the only place he can find a job. A small community mostly inhabited by Mexican pickers. His wife (Maria Bello) and his daughters (Morgan Saylor and Elsie Fisher) are a little appalled by their new abode and community. White is assigned as the P.E and earth science teacher and over qualified as the assistant football coach. The head coach takes an instant dislike to him when White keeps a kid with a concussion from the field and kicks him out. After White notices that some of the teenage pickers who run back and forth from the fields to school are fast, he decides to start a cross country team to compete in California's first state championship. The fastest of the seven runners, Thomas Valles (Carlos Pratts) has family issues. The Diaz brothers David (Rafael Martinez), Damacio (Michael Aguero) and Danny (Ramiro Rodriguez) have to put their field work first. Johnny Sameniego (Hector Duran) and Jose Cardenas (Johnny Ortiz) round out the team.

Everyone calls White “homes” or “blanco” and he puts up with a fair amount of attitude and ribbing from the team. Nobody really thinks that White can make anything worthwhile from this endeavor. The boys don't have decent shoes and White tracks them with a kitchen timer. The families are not always supportive as they have years of negativity regarding the future of their children. It's hard enough to work in the fields to earn enough to live, much less spend hours training for races. That's something rich white kids do. That and golf. White who knows this is his last chance at teaching has to learn how to communicate with the boys and their families, even if it means eating eight enchiladas.

It's a satisfying story even though you know what happens in the end. The races are exciting and the community support is heart warming. Costner plays White low keyed and not as the Caucasian savior of the little brown people. He manages to keep his character flawed and human. The last few minutes of the movie revisits the real life men and how they managed to get out of the dead end future because of their ability to run and win. Bring plenty of tissue.
(Review by reesa)